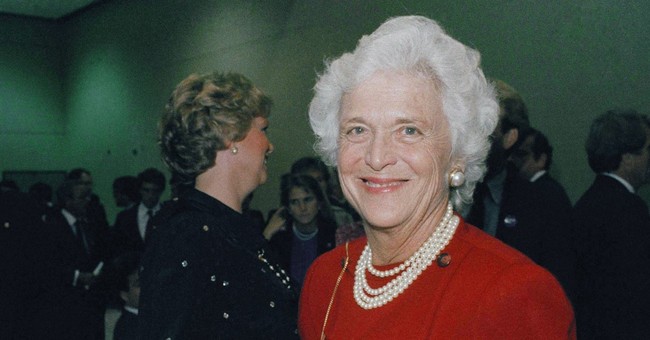 Shortly after news came out about Bush’s passing, Randa Jarrar tweeted, “Barbara Bush was a generous and smart and amazing racist who, along with her husband, raised a war criminal. F*** outta here with your nice words,” she wrote.

Bush passed away Tuesday at the age of 92 after she declined further medical treatment for her failing health, opting instead for “comfort care.”

The kind words about Bush, often described as “everybody’s grandmother,” had no impact on Jarrar.

“PSA: either you are against these pieces of s--- and their genocidal ways or you're part of the problem. That’s actually how simple this is. I'm happy the witch is dead. Can’t wait for the rest of her family to fall to their demise the way 1.5 million Iraqis have,” Jarrar followed up.

Ben Shapiro was quick to respond.

“Good news: you won’t have to see her when she’s in heaven and you’re burning in hell,” he wrote on Twitter.

“Nothing like the kindnes of the #progressive heart.....” said Andrew Wilkow.

So how did Jarrar respond to all the criticism? By reminding everyone she’s tenured and makes a lot of money.

“sweetie i work as a tenured professor. I make 100K a year doing that. i will never be fired. i will always have people wanting to hear what i have to say. even you are one of them! <3” she wrote.

The backlash forced the university to respond.

“On behalf of Fresno State, I extend my deepest condolences to the Bush family on the loss of our former First Lady, Barbara Bush,” Fresno State President Joseph Castro said in a statement. “We share the deep concerns expressed by others over the personal comments made today by professor Randa Jarrar, a professor in the English Department at Fresno State.”

Castro noted that Jarrar’s comments were made “as a private citizen.”

“Professor Jarrar’s expressed personal views and commentary are obviously contrary to the core values of our University, which include respect and empathy for individuals with divergent points of view, and a sincere commitment to mutual understanding and progress,” he added.