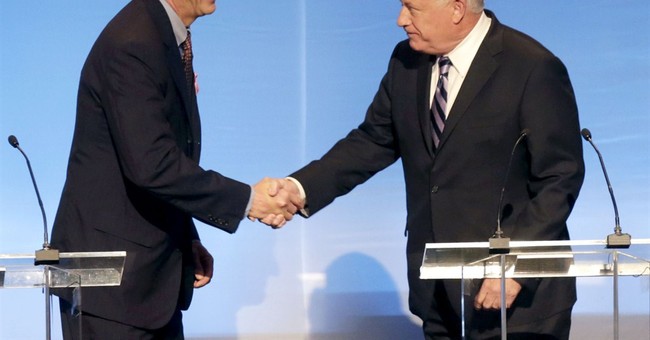 In the second of three debates that took place on Monday night, Illinois Gov. Pat Quinn and Republican challenger Bruce Rauner sparred over who could better improve the lives of Illinois’ African American community, particularly on the issues of jobs, taxes, crime, and education.

Though polling shows that black voters overwhelmingly support Quinn, Rauner said he believes the governor is “taking the African American vote for granted.”

For his part, Quinn noted that he has a diverse cabinet, while pointing out that his opponent failed to hire African Americans to executive positions at the equity investment firm Rauner previously chaired.

The businessman also hit Quinn for the incessant attack ads he’s running against him. “I cannot keep up with the baloney and lies that you spread,” Rauner said. “You can’t run on the truth. The truth is you’re the worst governor in America.”

The Chicago Tribune has more:

Asked if he supported a ban on so-called assault weapons, Rauner did not directly answer, instead saying “the most important thing we can do with guns is to make sure we keep guns out of the hands of criminals and (the) mentally ill.” Crime in the black community was a result of a “lack of opportunity” caused by Democratic failures to improve education and create jobs, he said.

But Quinn said he supported an assault weapons ban as well as a ban on high-capacity ammunition magazines — something unlikely to win approval in the General Assembly.

The Democrat charged that Rauner’s support of lowering state income tax rates to their 2010 levels is “extreme, radical way” of budgeting that will cost the state billions in tax revenues — much of it for education. Quinn wants to make permanent the state income tax increase Democrats passed and he signed after the 2010 election — but refused to say directly if he would push for it, win or lose, in the post-election, lame-duck session. The bulk of the tax hike is scheduled to roll back on Jan. 1.

“I understand how important education is to our jobs,” said the governor, who added that “to have good jobs, you need a good education and that’s what I’m committed to.”

Rauner has said he would increase school funding, but it’s unclear how he would do so while cutting taxes. He also expressed support for giving parents “options” to public schools, including charter schools, vouchers and scholarships.

Quinn repeatedly cited his support for issues backed by hometown President Barack Obama, including the Affordable Care Act and a push for a higher minimum wage, as a way to enlist support among black voters. Obama made one fundraising visit for Quinn and is scheduled to appear at a rally on Sunday at Chicago State University, the governor said after the debate.

Rauner has said he would not have expanded subsidized health care coverage for the poor under what’s known as Obamacare.

“Pat Quinn has been a total failure for the African American community of Illinois and the governor’s failures were on full display,” Rauner campaign spokesman Mike Schrimp said in a statement. “Worse, the governor flat-out refused to back down on his plan to raise income taxes on families and small businesses right after the election. The African American community, like all communities across Illinois, are hurting under Pat Quinn and will be hurting even more if Pat Quinn gets his massive tax hike into law. The people of Illinois have a clear choice between Pat Quinn’s massive tax increase and Bruce Rauner’s vision of more jobs, better schools, lower taxes and term limits on career politicians.”