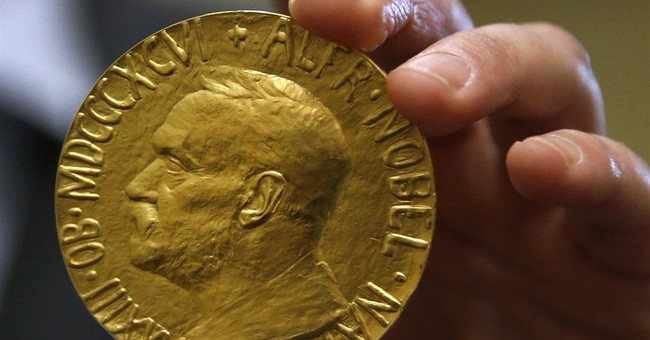 Nobel Prizes continue to be announced this week, and according to a new Rasmussen poll, Americans are both skeptical about how winners are chosen and continue to question President Obama’s Peace Prize win back in 2009.

Rasmussen Reports has the details:

A new Rasmussen Reports national telephone survey finds that 54% of American Adults think politics play a role in the awarding of Nobel Prizes. Just 17% disagree, but 30% are not sure. (To see survey question wording, click here.)

Fifty-five percent (55%) of adults say that, six years into his presidency, President Obama still does not deserve the prize that he won in 2009. Twenty-six percent (26%) think he still deserves the prize. Another 18% are not sure.

The number who think politics play a role is up slightly from 51% last year. In 2009, the year President Obama won the Nobel Peace Prize, belief that politics played a role in the awarding of the prizes climbed into the high 50s. In 2008, only 40% felt that way.

Just 35% of Americans believethe Nobel Prize is the most prestigious award a person can win. Thirty-seven percent (37%) disagree, while another 27% are not sure.

That’s a slightly less positive view of the prize than adults expressed last year, but is generally in line with previous years.

The Nobel Peace Prize is an award that Mother Teresa, Yasser Arafat, and Barack Obama have won, but Gandhi never did, so Americans have every right to be both confused and skeptical about the role of politics in decision making. The committee ultimately has its reasons, however, and if one is truly interested in understanding more about how the process works, Jay Nordlinger’s “Peace, They Say” is a great place to start.

The committee will announce this year's winner of the Peace Prize on Friday.