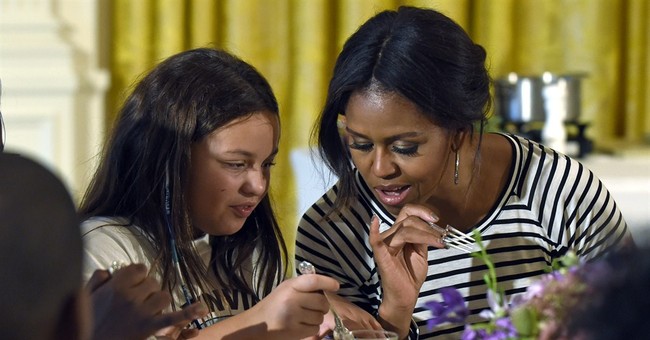 Michelle Obama has been a champion of increased health standards for school lunches in her time as First Lady. As part of her Let's Move! program and the Healthy Hunger-Free Kids Act of 2010, there have been new nutrition standards for public schools. Republicans say that the standards are unnecessary, intrusive, trample on local school perogatives, and is too expensive. Congress is making moves to relax these new guidelines:

Some school nutrition directors have lobbied for a break, saying the rules have proven to be costly and restrictive. House Republicans have said they are an overreach, and have pushed a one-year waiver that would allow schools to opt out of the standards for the next school year if they lost money on meal programs over a six-month period.

The waiver language stalled this summer after the first lady lobbied aggressively against it and the White House issued a veto threat. The food and farm spending bill that contained the provision was pulled from the House floor, a move House Republicans attributed to scheduling issues.

But the waiver has new life this month as lawmakers are expected to pass a catchall spending bill to keep government programs running. Republican Rep. Robert Aderholt of Alabama, the chairman of the House subcommittee that oversees the school meal spending, has been pushing to include the waiver in the wide-ranging bill.

This comes on the heels of a Twitter movement to document some of their school lunches - as described by my colleague Leah Barkoukis as "not pretty." It remains to be seen if Republicans will be able to push these new regulations through with legislation, as President Obama has promised a veto in the past, but the #thanksmichelleobama backlash might create an opening here.