Trump: Quite Frankly, I Don't Care About the Political Ramifications of Shutting Down the Government for Border Security 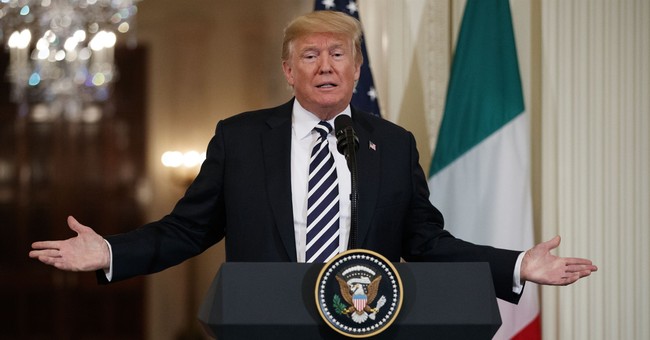 President Trump isn't backing down on his calls to shut down the government if Congress can't get a bill passed that includes a wall and additional border security.

The comments come after a meeting with Senate Majority Leader Mitch McConnell and House Speaker Paul Ryan last week. Both pushed back on the idea, McConnell did so publicly.

Senate Majority Leader Mitch McConnell said Friday that border wall funding would "probably" have to wait until after midterms, two days before President Donald Trump weighed in on the issue on Twitter, contradicting McConnell and threatening to push the government in to a shutdown.

On WHAS Radio on Friday, McConnell said that the wall funding issue is "something we do have a disagreement on," and that it would "probably" have to wait. He also said that a government shutdown is "not going to happen."

During a joint press conference with Italian Prime Minister Giuseppe Conte Monday at the White House, President Trump reiterated his border stance and had no qualms about shutting down the government over a lack of wall funding.

The House and Senate have limited time before the current legislative session ends.