Promise Kept: Remains of U.S. Troops are on Their Way Home From North Korea 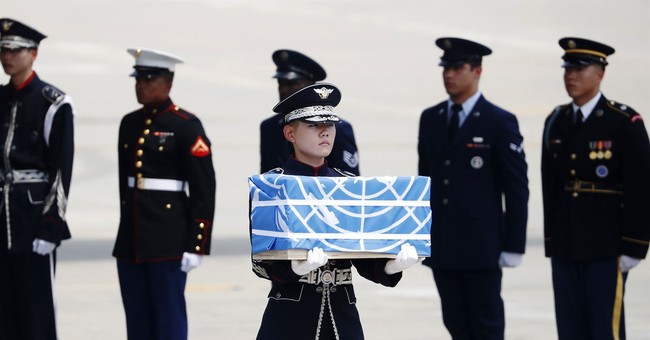 The remains of U.S. troops killed in the Korean War are on their way home from North Korea.

"At their historic meeting in Singapore, President Donald J. Trump and Chairman Kim Jong Un took a bold first step to achieve the complete denuclearization of the Korean Peninsula, transform relations between the United States and North Korea, and establish enduring peace. Today, the Chairman is fulfilling part of the commitment he made to the President to return our fallen American service members. We are encouraged by North Korea’s actions and the momentum for positive change," White House Press Secretary Sarah Sanders released in a statement Thursday night. "A U.S. Air Force C-17 aircraft containing remains of fallen service members has departed Wonsan, North Korea. It is accompanied by service members from United Nations Command Korea and technical experts from the Defense POW/MIA Accounting Agency. The C-17 is transferring the remains to Osan Air Base, where a formal repatriation ceremony will be held on August 1."

North Korea has handed over what are believed to be the remains of US troops killed during the Korean War.

The 55 boxes are being removed from a US military jet at Osan Air Base in South Korea: https://t.co/jmsl76h9rC pic.twitter.com/1O9B9f7P0E

"The United States owes a profound debt of gratitude to those American service members who gave their lives in service to their country and we are working diligently to bring them home. It is a solemn obligation of the United States Government to ensure that the remains are handled with dignity and properly accounted for so their families receive them in an honorable manner," she continued. "Today’s actions represent a significant first step to recommence the repatriation of remains from North Korea and to resume field operations in North Korea to search for the estimated 5,300 Americans who have not yet returned home."

President Trump thanked North Korean dictator Kim Jon Un for following through on his commitment to return the remains as part of ongoing peace talks.

The Remains of American Servicemen will soon be leaving North Korea and heading to the United States! After so many years, this will be a great moment for so many families. Thank you to Kim Jong Un.

During a speech to the Veterans of Foreign Wars Convention earlier this week in Kansas City, Missouri, President Trump promised remains would be returned to families in the U.S. soon.