President Trump: I'll Be Signing an Executive Order Changing the Zero Tolerance Policy on the Border 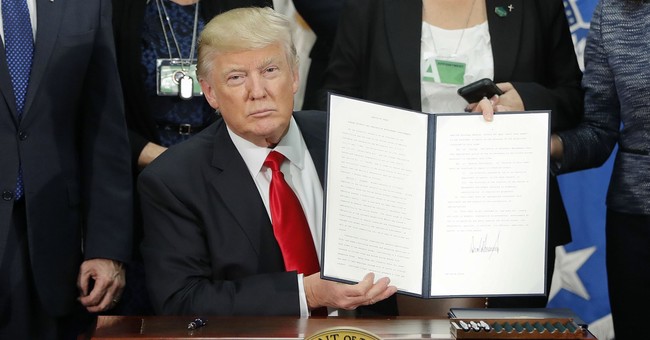 President Trump told pool reporters at the White House he will be signing an executive order Wednesday afternoon to change current zero tolerance policies for illegal aliens who cross the border with children.

"We're looking to keep families together. Very important. We're going to be signing an executive order. We are also going to count on Congress, obviously, but we are signing an executive order in a little while. We're going to keep families together but we still have to maintain toughness or our country will be overrun by people, by crime, by all of the things that we don't stand for and that we don't want," Trump said.

"So I'm going to be signing an executive order in a little while before I go to Minnesota but, at the same time, I think you have to understand, we're keeping families together but we have to keep our borders strong. We will be overrun with crime and with people that should not be in our country," he continued.

The president has also cancelled the congressional picnic, which was scheduled to happen at the White House Thursday.

Pres also announces he's cancelling WH picnic for Congress tomorrow. Says it doesn't feel right to have a picnic when so much work still to be done. Will reschedule when things "going extremely well." pic.twitter.com/1fYjZauAWV

The Department of Homeland Security is developing the executive action. The goal is to continue enforcing immigration law, which deems crossing into the U.S. without permission a crime, while keeping legitimate family units together.

Meanwhile, House Speaker Paul Ryan is still working on getting enough votes for legislation to solve the problem.

"As I said last week, we do not want children taken away from their parents. We can enforce our immigration laws without breaking families apart. The administration says it wants Congress to act, and we are," Ryan said during his weekly news conference Thursday morning. “Tomorrow, the House will vote on legislation to keep families together. Under this bill, when people are being prosecuted for illegally crossing the border, families will remain together, under DHS custody, throughout the length of their legal proceedings."

"Additional funding is also going to be made available so that DHS has sufficient resources to house and care for families during this entire process. This is obviously something we discussed last night with the president at our conference, and I hope that we will be able to pass this tomorrow," he continued. “Bottom line is this: We are going to take action to keep families together while we enforce our immigration laws.”