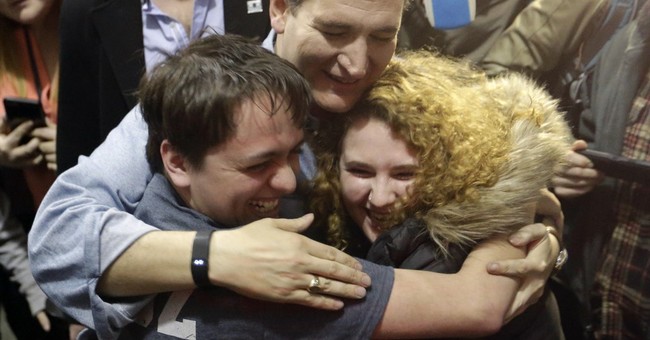 10:00 PM: Decision Desk is projecting Ted Cruz as the GOP winner, Hillary Clinton for the Democrats.

We project that Ted Cruz has won the 2016 Iowa Caucus.

We also project that Hillary Clinton is the winner of the Iowa Democratic caucus.

9:40 PM: Ted Cruz is widening his lead over Donald Trump, who is watching Rubio close behind him.

9:24 PM: Lines continue to be very long at caucus sites in Des Moines with potential record turnout being reported.

8:57 PM: Donald Trump Jr. has arrived at a caucus location in Des Moines.

8:33 PM: Republican officials at a number of different caucus sites are reporting very long lines and some have run out of ballots. Last night on The Kelly File, Iowa GOP Chairman Jeff Kauffmann anticipated high turnout and printed extra ballots and other election materials. Apparently, it wasn't enough.

Some locations stayed opened a bit longer due to lines... #IowaCaucus pic.twitter.com/tIZZ9zjUvE

8:18 PM: At many caucus locations there are long lines. Candidates are making the rounds and doing their best to change minds at the very last minute. Townhall's Cortney O'Brien and Matt Vespa are on location in Iowa and just ran into Ben Carson. Surrogates are also hard at work promoting their candidates.

Caucus goer speaks for Ted Cruz: "We need somebody who will stand up for the Constitution." #IowaCaucus #tcot pic.twitter.com/1hgYb2zU1R

The tremendous and luxurious #IowaCaucus has begun.

8:00 PM: The first votes of the 2016 presidential election cycle have been officially cast as the Iowa caucuses get underway and start to close. According to early entrance polling, socialist Bernie Sanders has a lead on Democrat Hillary Clinton. On the Republican side, first time caucus goers make up a larger percentage than they did in 2012 and 2008 and 62 percent of the evangelical vote will be turning out tonight.