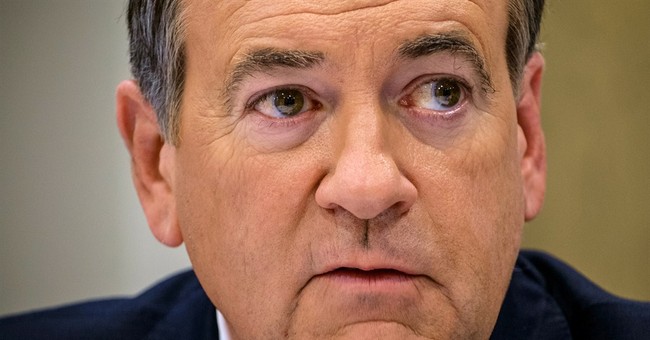 UPDATE: The Huckabee campaign has reached out to me with a statement refuting reporting the governor granted Clemmons clemency.

“Governor Huckabee has a solid record on law and order during his tenure. He had thousands of commutation requests come before him during the ten-and-a-half years he served as governor and he denied over eighty-five percent of them. If anyone singles out one or two cases, they do not get an accurate representation of his strong-on-crime record. As for the Maurice Clemmons case, Gov. Huckabee did not offer a 'pardon' to Clemmons, nor did he release Clemmons from jail. The post prison transfer board recommended to cut his sentence to 47 years, which gave him parole eligibility. The judge in the case recommended the same action because the sentence handed was for crimes committed back in 1989 was excessive," the campaign released in a statement. “Gov. Huckabee has the utmost respect and for soldiers and law enforcement officers because he knows they are the only thing standing between our freedom and total anarchy. This was a tragic situation and the governor regrets the failure in the system which led to this heinous crime.”

In case you missed it yesterday, former Arkansas Governor Mike Huckabee announced another run for the White House. In an already crowded GOP field, there are many questions surrounding whether Huckabee can successfully make it through the primary. Putting the horse race aside, pundits seem to be forgetting a very important and devastating decision Huckabee made during his time as governor.

In 2000, despite objections from prosecutors, Huckabee granted clemency to a man named Maurice Clemmons. Background from the Arkansas Leader:

Several prosecutors around the state are upset with Gov. Huckabee for grant- ing clemency to violent criminals, but he is blaming the prosecutors for often not seeking the maximum penalty and keeping felons locked up longer.

Until now, Huckabee has refused to comment on his controversial policy of making violent prisoners eligible for parole– they include murderers, armed robbers and rapists, who often return to a life of crime after they’re freed – but in a statement to The Leader this week, he lashed out at prosecutors for not doing more to keep prisoners behind bars – to which Pulaski County Prosecuting Attorney Larry Jegley had this response: “That’s a load of baloney.”

“I’m offended as a prosecutor and as a citizen. He can blame the prosecutors, but ultimately he’s the man responsible,” Jegley says. “He’s the only one who can sign on the dotted line."

Jegley cites numerous examples of Huckabee’s freeing felons who go on committing more crimes and wind up back in prison.

Maurice Clemmons received a 35-year sentence in the early 1990s for armed robbery and theft. His sentence was commuted in May 2000, and he was let out three months later.

The following March, Clemmons committed two armed robberies and other crimes and was sentenced to 10 years. You’d think they’d keep him locked up after that, but no: He was paroled last March and is now wanted for aggravated robbery.

If Huckabee decides to set these criminals free, Jegley says, at least “he ought to give an accounting. I can’t imagine why in the world they’d want them released from jail. There’s a good reason we’re afraid of them. The sad truth is that a significant number of people re-offend.”


Nine years later, Clemmons was arrested and charged for the murders of four Washington State police officers. The officers left behind husbands, wives and children

Maurice Clemmons, the 37-year-old Tacoma man being sought for questioning in the killing this morning of four Lakewood police officers, has a long criminal record punctuated by violence, erratic behavior and concerns about his mental health.

This is just one example of many. Huckabee has an alarming record of releasing criminals who end up re-committing serious and violent crimes like rape, assault and murder. That record should be up for scrutiny as he attempts, again, to make it into the White House.