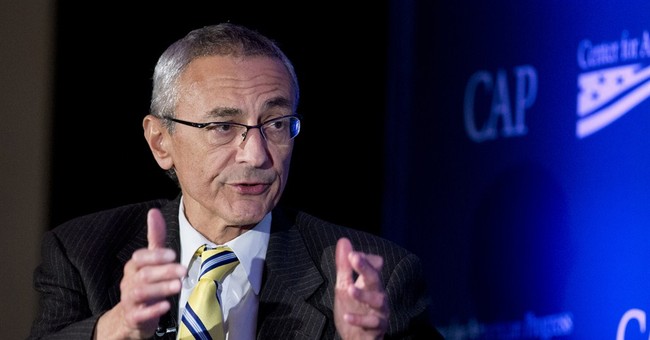 Naturally Podesta is calling Schweizer's book a bunch of "conspiracy theories" compiled together in one place, despite the fact he hasn't seen or read the book yet.

Clinton Cash has been grabbing headlines on multiple news networks for more than 24-hours now and will reportedly show upon publishing that Hillary Clinton exchanged political favors as Secretary of State in return for donations to the Clinton Foundation from foreign governments and companies.

On Sunday the New York Times published a piece previewing Schweizer's book, saying it is well documented, researched and fair.

"Clinton Cash” is potentially more unsettling, both because of its focused reporting and because major news organizations including The Times, The Washington Post and Fox News have exclusive agreements with the author to pursue the story lines found in the book.

He writes mainly in the voice of a neutral journalist and meticulously documents his sources, including tax records and government documents, while leaving little doubt about his view of the Clintons.

His reporting largely focuses on payments made to Mr. Clinton for speeches, which increased while his wife served as secretary of state, writing that “of the 13 Clinton speeches that fetched $500,000 or more, only two occurred during the years his wife was not secretary of state.”


Schweizer, who has a history of investigating Republicans and Democrats in Washington D.C., has presented his work to reporters at the Washington Post, Fox News and the New York Times for vetting and further journalistic pursuit.

Yesterday the White House would not confirm or deny whether Clinton did in fact take donations in exchange for political favors at the State Department during her tenure.

"The President continues to be extraordinarily proud of the work that Secretary Clinton did as the Secretary of State," Press Secretary Josh Earnest said.