Rahm Emanuel: I Need Your Help to Get Re-elected in Chicago, Republicans 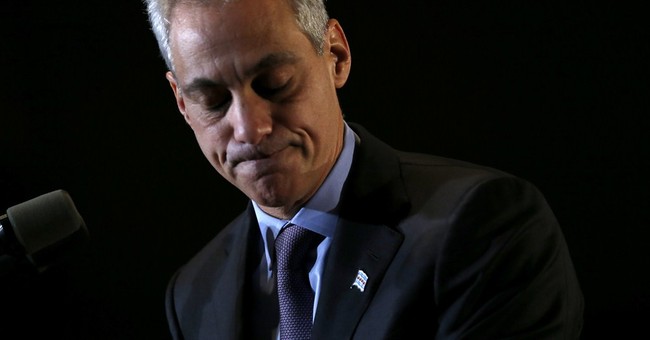 Chicago Mayor Rahm Emanuel is having a really tough time getting re-elected in the Windy City after heading to a run-off last month against opponent and Cook County Commissioner Jesus Garci. In fact, Emanuel is having such a hard time, he's asking Republicans, who he's spent his entire life attacking, for help. Not only that, it looks like some Republicans are happy to do it. More from National Journal:

Chicago Mayor Rahm Emanuel is about as partisan a Democrat as there is in this country. But to win a second term and avoid a humiliating defeat, he'll need to win over and turn out the small number of Republicans in the city.

Emanuel isn't openly telegraphing his runoff strategy, but signs of his reliance on the party he has worked to oppose his whole career are everywhere. Gov. Bruce Rauner, a longtime acquaintance of the mayor's, has been working behind the scenes to help his friend, while GOP Sen. Mark Kirk warned this month that Chicago could become like Detroit if Emanuel isn't reelected. Rahm's most recent ad comes straight out of the Mitt Romney playbook, accusing his outspokenly liberal opponent, Jesus "Chuy" Garcia, of wanting to hike Chicagoans' taxes by supporting $1.9 billion in spending programs. Several of the top donors to Emanuel's Chicago Forward super PAC are conservative Republicans, including hedge-fund manager Ken Griffin, a top Romney supporter and a Crossroads contributor, and investor Muneer Satter, who spent more than $1 million over the past few years on behalf of top Republican candidates and is backing Jeb Bush's campaign for president.

Politics. Such a weird thing.


The first run-off debate between Emanuel and Garcia was last night. Election day is April 7.