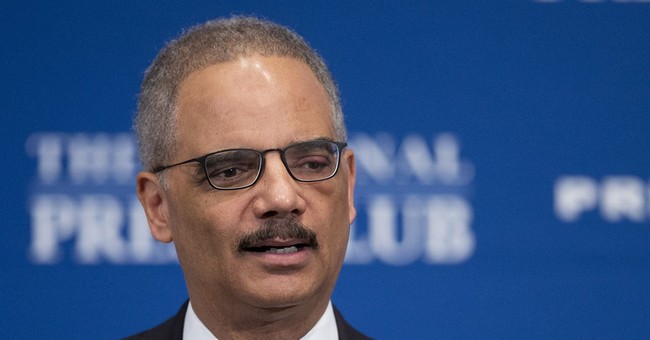 Speaking during a National Press Club event yesterday, Attorney General Eric Holder was asked why the Obama administration is still refusing to call ISIS and other Islamic terror groups, Islamic. The question prompted Holder to openly sneer and take a shot at Fox News, claiming if the network wasn't talking about Islamic terror, they'd have "nothing to talk about."

"We spend more time, more time, talking about what you call it, as opposed to what to do about it. You know? I mean really. If Fox didn't talk about this they'd have nothing else to talk about," Holder said. "You know, radical Islam, Islamic extremism, you know, um, I'm not sure an awful lot is gained by saying it."

Top military commanders, both current and retired, have criticized the administration for failing to properly distinguish the enemy. In fact, they don't believe you can win a war without thoroughly accepting who the enemy is, which includes calling the enemy what it is: Islamic.

Former Defense Intelligence Agency Chief Lt. Michael Flynn testified in front of Congress last week about the importance of clearly defining what the United States is up against and recently made an appearance on Fox News Sunday to further make the point.

The White House kicked off a three-day generic "extremism" summit Tuesday and will not specifically address the issue of Islamic extremism, despite recent attacks in Canada, Paris, Libya, Iraq, Denmark etc. The Obama administration refuses to define extremism as Islamic not because it doesn't matter, but because they're not interested for politically correct reasons.