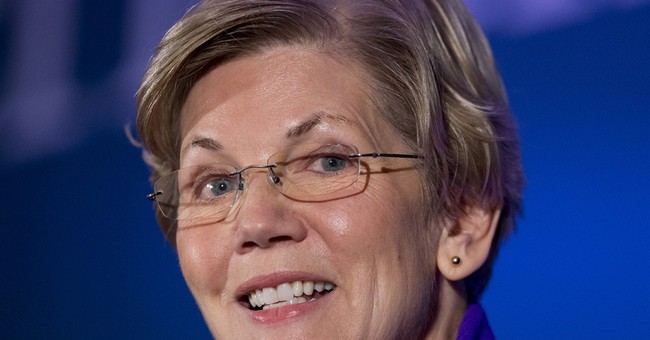 As we inch closer to the 2016 presidential election, many continue to question whether Democrats will put up a challenger against Hillary Clinton, who all but seems to have locked down her party's nomination.

During an interview with former Obama White House advisor David Axelrod yesterday, conservative radio host Hugh Hewitt asked if Massachusetts Senator Elizabeth Warren has a chance at defeating Clinton. The answer was a diplomatic "no."

HH: Can Elizabeth Warren beat her?

DA: I don’t think Elizabeth, I know Elizabeth Warren well, and my strong feeling is she’s not going to run. I think she’s trying to influence the direction of the party, and you have more influence as a potential candidate than you do if you take yourself out. So she’s allowing, she’s sticking to this language of I’m not running for president, and titillating people with it, because it gives her more leverage. I don’t think she would beat her. I have high regard for Elizabeth. I don’t think she would beat her. Look, look at the polling, Hugh. Hillary is probably as well-positioned within her own party as any open seat candidate has been in our lifetime. And you know, she’s going to have to go out and work for it. If she assumes anything and doesn’t go out and work for it, and earn it, and make her case and present her, a rationale for a candidacy that resonates with people, then anybody is vulnerable under those circumstances. But you know, I know the team she’s assembling. I have a high regard for them. I have some sense of the kind of thinking she’s doing. I think she’s going to come out of the gate very strong.

Notice how Axelrod starts the interview by claiming he doesn't believe Warren will run and then goes into detail about the team she's assembling to make a bid for the White House.

Meanwhile Vice President Joe Biden seems to be fading from 2016 presidential talk despite a trip to Iowa today and past statements about his desire to run.

Behind the scenes, though, there are few signs the vice president is taking steps toward mounting a third bid for the top job at the White House. As Hillary Rodham Clinton builds an elaborate campaign-in-waiting, and a few other Democrats nibble around the edges, Biden's name has faded from the mix of expected 2016 candidates.

Biden's aides and longtime political advisers say he isn't organizing in early voting states such as New Hampshire and Iowa, although he'll visit Des Moines on Thursday. He has yet to form an exploratory committee or other apparatus that could rapidly scale up to become a campaign.

Although he stays in close touch with former political aides, no staff has been lined up to take on key roles in a potential bid. Nor are any Democrats in the early voting states organizing a "Draft Joe" movement — the pining of those who aren't ready for Hillary is reserved for Massachusetts Sen. Elizabeth Warren.

The bench of 2016 Democrat presidential candidates is shallow, with Clinton continuing to dominate the press, resources and the confidence of the party behind her. The options for the left are limited and there's no doubt the Clinton machine is prepared to crush anyone who gets in Hillary's way.