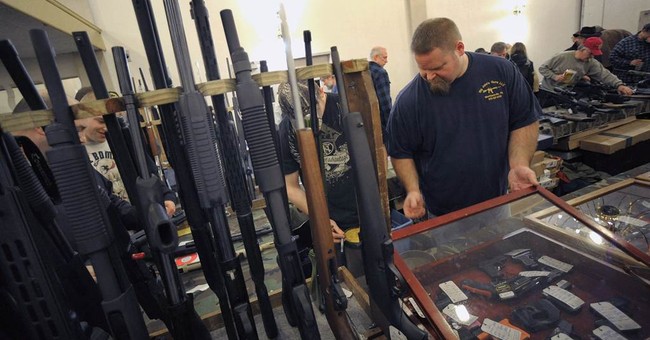 Last week the ACLU released information about the Department of Justice tracking the license plates of millions of cars belonging to American citizens. As if that wasn't alarming enough, documents obtained by the organization through a Freedom of Information Act request show officials from the Drug Enforcement Agency and the Bureau of Alcohol, Tobacco and Firearms were particularly interested in going to gun shows and scanning the license plates of cars in the parking lot for tracking purposes. From the ACLU:

The Drug Enforcement Administration and the Bureau of Alcohol, Tobacco, Firearms and Explosives collaborated on plans to monitor gun show attendees using automatic license plate readers, according to a newly disclosed DEA email obtained by the ACLU through the Freedom of Information Act.

The April 2009 email states that “DEA Phoenix Division Office is working closely with ATF on attacking the guns going to [redacted] and the gun shows, to include programs/operation with LPRs at the gun shows.” The government redacted the rest of the email, but when we received this document we concluded that these agencies used license plate readers to collect information about law-abiding citizens attending gun shows. An automatic license plate reader cannot distinguish between people transporting illegal guns and those transporting legal guns, or no guns at all; it only documents the presence of any car driving to the event. Mere attendance at a gun show, it appeared, would have been enough to have one's presence noted in a DEA database.

Responding to inquiries about the document, the DEA said that the monitoring of gun shows was merely a proposal and was never implemented. We were certainly glad to hear them say this, as we had rationally, based on the scrap of information left unredacted in the document, concluded that gun show monitoring was underway. After all, this would not be the first time that the government has used automatic license plate readers to target the constitutionally protected right to assemble.


The Department of Justices' own surveys of prison inmates show criminals don't obtain their firearms from gun shows.

Isn't it telling how ATF (specifically the Phoenix office in partnership with DOJ headquarters in Washington D.C.) had zero interest in tracking more than 2500 weapons they purposely gave to Mexican-narco terrorists through Operation Fast and Furious (which were used to killed hundreds of people, including U.S. federal law enforcement officers), but thought tracking law-abiding, innocent gun show attendees might be appropriate.