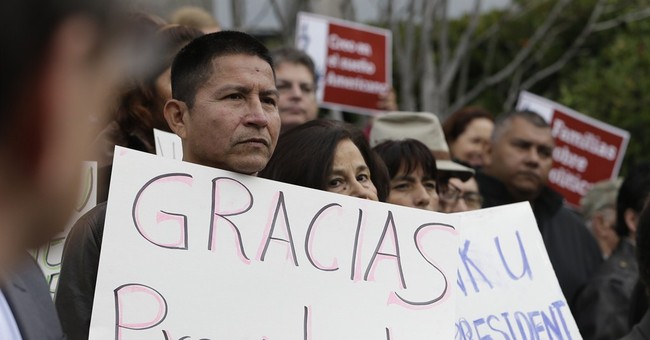 The Mexican government is making it easier for those living illegally inside the United States to obtain documentation necessary to take advantage of President Obama's executive amnesty. Details from AP:

The Mexican government on Thursday will start issuing birth certificates to its citizens at consulates in the United States, seeking to make it easier for them to apply for U.S. work permits, driver's licenses and protection from deportation.

Until now, Mexico has required citizens to get birth certificates at government offices in Mexico. Many of those living in the U.S. ask friends and relatives back home to retrieve them, which can delay their applications for immigration or other programs.

Now, even as Republicans in Congress try to quash President Barack Obama's reprieve to millions of immigrants living illegally in the U.S., Mexico is trying to help them apply for programs that would allow them to remain temporarily in the country and continue sending money back to relatives across the border.

In December 2014 the United States Citizenship and Immigration Services (USCIS) announced 1000 new job openings, many of them permanent and at the top tier of the federal pay scale, to process paperwork and approve applications for Obama's amnesty program.

As Conn reported yesterday, the House voted to defund Obama's executive action on illegal immigration by stripping funding for the program.

"The House defended its constitutional authority to make the law of the land in today’s vote to oppose President Obama’s unconstitutional executive actions on immigration," Rep. Raul Labrador (R-ID) said after the vote. "I am hopeful the Senate will do its job and reassert the duty of Congress to make immigration law."

An amendment offered by Rep. Rob Aderholt (R-AL) forbidding DHS from spending any money implementing Obama's Deferred Action for Parental Accountability program passed 237 to 190. The amendment specified that the spending restrictions applied to fees collected by the agency and applied to four other memos written prior to November 20.

The White House is threatening to veto that legislation. Keep in mind that the funding for Obama's executive action is coming through the United States Citizenship and Immigration Services, a fee, not tax based agency under the jurisdiction of Homeland Security. As I wrote last month:


While Mexico helps facilitate Obama's executive amnesty, thousands of legal immigrants are getting screwed with longer wait times and through their fees being used to fund the lawless. All in the name of "fairness," I'm sure.