Poll: More Women Plan to Vote For Republicans in Midterms 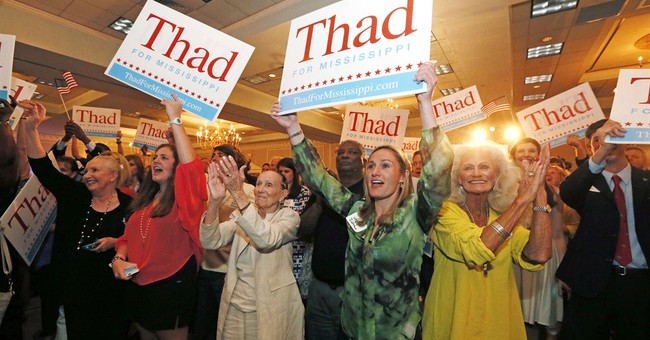 The war on women rhetoric that was used in 2012 to secure President Obama's second term in the White House isn't paying off for Democrats in the 2014 midterm election cycle.

Earlier this week, a story published by POLITICO showed Obama has lost key support from women in battle ground states.

With two weeks until Election Day, the president’s diminished standing with women is quickly becoming one of the biggest liabilities facing Democrats as they struggle to hang onto the Senate majority.

In battleground states across the country, Obama is underwater with female voters — especially women unaffiliated with a political party — and it’s making it harder for Democrats to take advantage of the gender gap, according to public polling and Democratic strategists.


And a new AP poll released late yesterday shows more women are interested in voting for Republicans, not Democrats.

Women have moved in the GOP's direction since September. In last month's AP-GfK poll, 47 percent of female likely voters said they favored a Democratic-controlled Congress while 40 percent wanted the Republicans to capture control. In the new poll, the two parties are about even among women, 44 percent prefer the Republicans, 42 percent the Democrats.

So why the shift? First, young liberal and single women tend to show up for Presidential elections while sitting out midterms. Second, I'm hopeful that women are tired of the bogus war on women narrative and sick of being defined by the pills they may or may not choose to take. Third, extreme pro-abortion stances by Democrat candidates like Mark Udall in Colorado could be backfiring as the country, and women, trend to the pro-life side of politics.