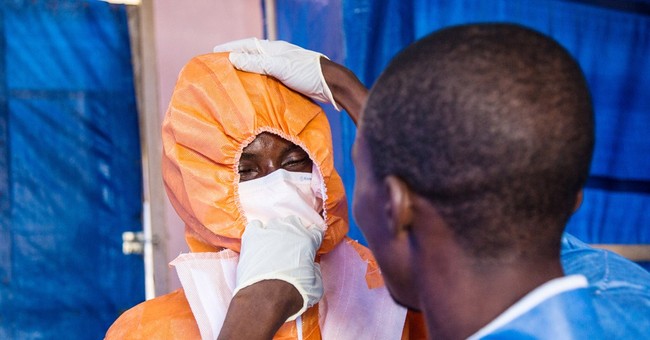 Earlier this week the far left activist group Agenda Project released an advertisement showing the dead bodies of Ebola victims in Africa and blamed Republican budget cuts for the outbreak. Agenda Project is the same group that produced the 2012 election ad portraying Paul Ryan pushing Grandma off a cliff. In case you missed it:

The ad is obviously over the top and classless, but it's also very false. The Washington Post fact checker took a look at the ad, its claims and determined it deserves four Pinocchios with a description of "absurd."

This ad is simply a more extreme version of a new Democratic talking point — that GOP budget cuts have harmed the nation’s ability to handle the Ebola outbreak. It mixes statistics — the budget for the Centers for Disease Control and Prevention (CDC) “cut” $585 million (the ad offers no date range) — with disturbing images of the outbreak and various Republican leaders saying variations of the word “cut.”

On many levels, this line of attack is absurd.

Obama’s Republican predecessor oversaw big increases in public-health sector spending, and both Democrats and Republicans in recent years have broadly supported efforts to rein in federal spending. Sequestration resulted from a bipartisan agreement. In some years, Congress has allocated more money for NIH and CDC than the Obama administration requested. Meanwhile, contrary to the suggestion of the DCCC ad, there never was a specific vote on funding to prevent Ebola.

There’s no doubt that spending has been cut, or at least failed to keep pace with inflation, but the fingerprints of both parties are on the knives. This blame game earns Four Pinocchios.

Earlier this week I attempted to debate the founder of Agenda Project, Erica Payne, about the ad on Hannity. Unfortunately, she doesn't have any TV manners nor a good argument to justify the ad.