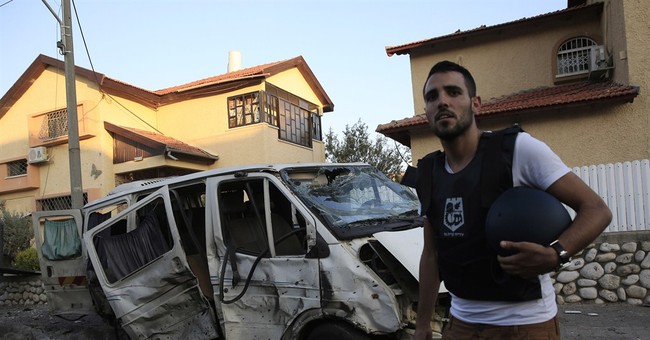 After agreeing to a 72-hour ceasefire less than 24 hours ago, Hamas has once again broken another temporary truce agreed to by both sides. It is believed Hamas has kidnapped an Israeli soldier and the fighting is continuing. More from Fox News:

The Israeli military says one of its soldiers is "feared" captured by Gaza militants.

The suspected kidnapping occurred shortly after a heavy exchange of gunfire erupted in the southern Gaza town of Rafah. Militants reportedly emerged from a tunnel shaft before a suicide bomber detonated himself, one senior Israel Defense Forces source told The Jerusalem Post.

"The incident is ongoing, and the IDF is in the midst of operational and intelligence efforts to track down the soldier," the source told the newspaper.

This morning, Hamas fired at our forces in S. Gaza in violation of a ceasefire. We suspect that an IDF soldier was kidnapped moments later.

We suspect that a group of Hamas terrorists, including a suicide attacker, kidnapped 2nd. Lt. Goldin at 9:30AM & dragged him into a tunnel.

Moments ago, 8 rockets and mortars were fired at Israel. 1 was intercepted and 7 hit open areas.

Hamas fires rockets at Israel from everywhere in Gaza - nowhere in the Strip is safe from Hamas' reign of terror. pic.twitter.com/acltPrSzBD

The latest kidnapping is exactly why Israel is doing everything to destroy dozens of tunnels Hamas has built.

Meanwhile, Secretary of State John Kerry's efforts to get ceasefires to stick are going nowhere.

UPDATE: Hamas broke the ceasefire 90 minutes after agreeing to it. Incredible.