Harry Reid to Doctor and Cancer Patient Tom Coburn: Stop Getting 'In the Weeds' on Obamacare 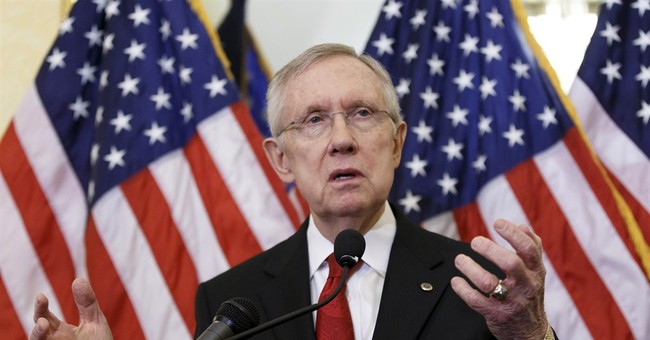 Earlier this month, Sen. Tom Coburn (R-OK) announced that the cancer he had beaten three times prior had returned and his treatment would be so debilitating that he would have to resign his seat in Congress. Unfortunately for Coburn, he was required under the law to enroll in the Affordable Care Act. As a result, Coburn has joined the ranks of those who have lost their preferred doctor as a result of the law.

Based on these three things, it's safe to assume Coburn knows a thing or two about the way our healthcare system should function.

Regardless, America's worst Senator Harry Reid, who also happens to be the Majority Leader, dismissed Coburn yesterday on the Senate floor for getting "in the weeds" about Obamacare. More from Joel Gehrke:

"Nineteen of the cancer centers in this country, only five are covered under Obamacare," he [Coburn] told the Washington Examiner Tuesday, a data point he attributed to the low payments the Affordable Care Act provides for those treatments."

"You know, it's a market, and what they've done is they've priced it where these cancer centers, a lot of them, aren't going to participate because they don't get paid to cover the costs," he said. Coburn, who is retiring at the end of this year, said his cancer center initially refused to accept the government health insurance, but has since reversed that policy.

Reid suggested that Coburn was taking too narrow a view of the law. "Dr. Coburn is very good at getting into the weeds and trying to find something that he thinks makes sense, but I think we need to look at the overall context of this bill," he replied when asked about Coburn's comments during a Senate press briefing.


Shorter Harry Reid: Coburn speaking about detailed experience as both a doctor and a cancer patient really isn't helpful in our efforts to hide the devastating effects of Obamacare, particularly when it comes to taking away cancer doctors and specialists...so... stop getting in the weeds!