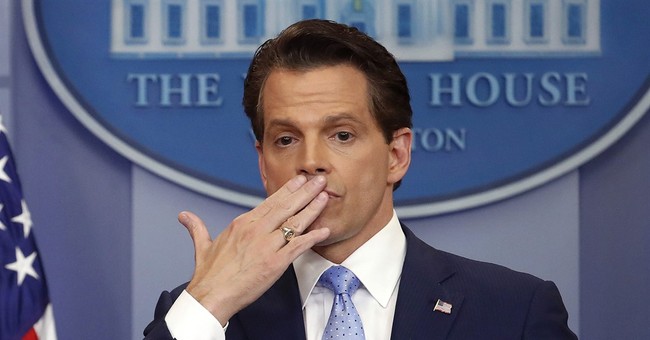 His comments on each show centered on a few themes - Russia, leaks, and pardons.

One of the biggest issues hobbling the administration is continual leaking and rumors about internal staff battles. Scaramucci told CBS' John Dickerson how he's going to solve the problem.

For some reason, I don't see Scaramucci having a problem walking in and firing the whole lot. He's not going to sit there and beg people to stop leaking and ask nicely. As he said, it's unprofessional.

One criticism of the administration's messaging and communications thus far has been that they're unorganized and reactionary and spending too much time addressing topics (Russia) that distract from a positive agenda. Scaramucci aims to change that.

"Let Robert Mueller and that team focus on that. I'm going to focus as little on that as possible.

"President doesn't operate like that. The president operates off the balls of his feet. He's an aggressive guy."

When talking about Russia on CNN's "State of the Union," though, Scaramucci was riled by Jake Tapper and created more controversy with this comment:

Since it was already known that there was Russian involvement in hacking emails before Trump was ever inaugurated, Tapper seized on the misstep. Scaramucci made it worse when he blurted out that it was Trump who said this to him in a phone call from Air Force One. Though in Scaramucci's comment he talked about hacking a "situation" and referred to emails, once the exchange hit the internet it was messaged as "Trump denies Russian hacking intel."

The two went back and forth about Trump's discussions with advisers and tweet on the subject of pardons, with Tapper pushing Scaramucci for a name of someone the President would want to pardon. Scaramucci was able to get a good point in about staff members running to the press about Trump's internal comments, which take on a life of their own outside of whatever context in which they were originally mentioned.

"The president is thinking about pardoning nobody.

"This is the problem with the whole system. He's the president of the United States. If I turn to one of my staff members at Skybridge and ask them a question and they run out to the news media and tell everyone what I'm thinking about. Is that fair to the president?

"The truth of the matter is that the president isn't going to have to pardon anybody because the Russia thing is a nonsensical thing."

Scaramucci's message to Press Secretary Sarah Huckabee Sanders is right up there with the Russia comment as the biggest unforced error of the day:

By his comment it wasn't clear if he was referencing he liked what the hair and makeup person did for Sanders, or for him, or just thought the person did a good job overall. I'll give you two guesses as to how that was messaged once it hit the internet.

But you probably only need one.

Yes, every "feminist" and Trump hater on Twitter was calling Scaramucci a sexist. Scaramucci clarified:

For the record, I was referring to my hair and make up and the fact that I like the make up artist. I need all the help I can get! #humor

Unfortunately in today's environment, once people have made up their mind about what you mean, they won't accept any clarification. A clarification is seen as trying to change your meaning because you saw a negative consequence once your initial sexist, racist, bigoted, privileged (insert your adjective here) point of view was discovered.