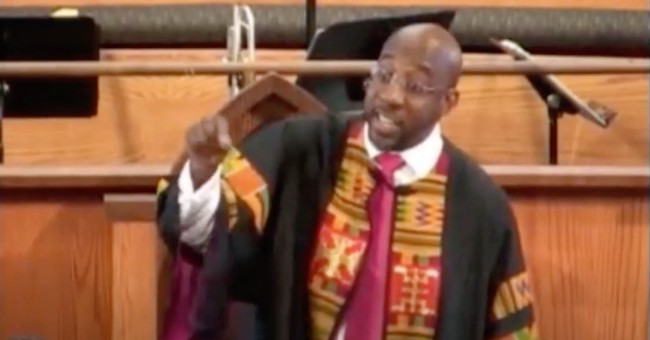 As Reagan noted yesterday, Democratic Senate nominee Raphael Warnock raged against the 2017 tax reform bill from the pulpit – telling parishioners that the GOP senators who voted to pass the "evil" legislation were "gangsters and thugs" attempting to "kill children." His unhinged rant shouldn't come as a surprise, given the other poisonous bile he's spewed at his congregations over the years. It makes perfect sense that this man is an acolyte of Jeremiah "God Damn America" Wright:

"While others were sleeping, members of the United States Senate declared war, launched a vicious and evil attack on the most vulnerable people in America," said Warnock. "Herod is on the loose. Herod is a cynical politician, who's willing to kill children and kill the children's health program in order to preserve his own wealth and his own power." Herod the Great was the Judean king who attempted to kill the infant Jesus by ordering the mass slaughter of Jewish babies in Bethlehem, according to the New Testament. Warnock continued, "On Friday night, the United States Senate decided by a slim majority to pick the pockets of the poor, the sick, the old, and the yet unborn in order to line the pockets of the ultra-rich. Don't tell me about gangsters and thugs on the streets, there are more gangsters and thugs in Washington, D.C., in the Capitol than there are—a bunch of them."

It's interesting that Warnock chose to warn against supposed negative implications for people "yet unborn" given his outspoken support for abortion (a requirement for entry into national Democratic politics that has rankled some of his fellow Black ministers). But setting aside the derangement of the clip above, please bear in mind that he's raging against...a tax cut for middle and working-class Americans. In fairness to Warnock, his ignorance was likely fueled by a torrent of hyperbolic lies from Democrats in Washington, who called the tax bill "armageddon" and a legislative "Frankenstein" that would make people die. They endlessly claimed that the bill benefited "the rich" and big corporations, and harmed everyone else. Warnock took it upon himself to add flourishes about "gangsters and thugs," but he was more or less singing from the dishonest Democratic hymnal.

His beyond-the-pale tirade falsely asserts that the tax reform robbed the poor, sick, and old in order to enrich the already-wealthy. In fact, it cut taxes across the board – reducing tax rates for every income group, on average. The overwhelming majority of American taxpayers and families received a tax cut, with the average family of four paying $1400 less in taxes compared to the previous status quo. In fact, in the first full year following the law's passage, the only income group whose average tax liability did not fall were those making over $1 million annually, according to IRS data and nonpartisan analyses. As part of a pro-growth economic agenda, including reducing burdensome regulations, the tax reform law helped spur an economic boom – including all-time record low unemployment across multiple demographic groups (including among Blacks, Hispanics, Asian-Americans and women), a meaningful and long-awaited surge in income and take-home pay, and a dramatic drop in poverty. In other words, the lunacy Warnock spouted to churchgoers was not only disgustingly hyperbolic and venomous; it was factually wrong.

Many of Warnock's ads in Georgia convey an "aw shucks / who me?" message in response to Republican attacks against his radicalism. I'm just a nice pastor who likes puppies, no matter what they may say. The reality, underscored in sermon after sermon, is that Warnock too often used his ministry to promote left-wing propaganda, delivered in demagogic rants. He seems, in other words, to be well-suited as a pastor at the sort of church that would enthusiastically welcome a Communist dictator for an anti-America rally. Warnock railed against Republican senators (including Georgia's David Perdue) for cutting working people's taxes, but he lauded demented, abject bigot Louis Farrakhan's Nation of Islam:

“Its voice has been important for the development of Black theology,” Warnock said, referring to an ideology developed by Black preachers during the Civil Rights era to combat White supremacy within Christianity. “It was the Black Muslims who challenged Black preachers and said, ‘you’re promulgating … the White man’s religion. That’s a slave religion. You’re telling people to focus on heaven, meanwhile, they’re catching hell,'” Warnock said. The reverend said the Nation of Islam was necessary to “put a fire” under Black preachers and keep them “honest” about the message coming from their pulpits.

The Left often tosses around terms like "racist," "bigot," "sexist," and "homophobe" to describe people with whom they disagree. Farrakhan actually fits each and every one of those bills, with his appalling comments about Jews representing his most vile hatred, based on many public statements. Warnock's opponent, Sen. Kelly Loeffler, has been savaged for unwittingly posing for a photograph with a disgusting racist. Her campaign unequivocally condemned the man after learning about his background. Does Warnock care to forcefully reject the sick leader of the organization he praised as "important" to challenging Black pastors to move away from the "White man's religion?" Or is Farrakhan okay because he shares Warnock's views on America's alleged "worship of whiteness?" Would Loeffler or Perdue get a pass for kind words for, say, David Duke's organization? I'll leave you with this, which would make Jeremiah Wright proud:

Recommended
Why Sen. Kennedy Is Comparing Biden's Actions to That of a 'Banked Catfish'
Beth Baumann

Warnock has attacked police officers, men and women in the military, and now our great country itself ???? pic.twitter.com/ytsZBKo89O

This is the man who could make Chuck Schumer majority leader and Kamala Harris the Senate's tie-breaking vote. Early voting in Georgia started this past Monday, with the runoff election being held January 5.