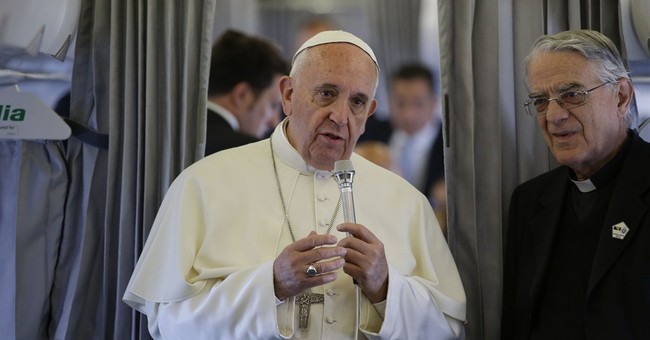 The Catholic Church is embroiled in another scandal of systemic sexual abuse, and some of the institution's top leaders are responding shockingly poorly.  Having been credibly accused of looking the other way on a former Cardinal's rampant misconduct and abuse, and even rehabilitating his standing by reducing previously-imposed sanctions against him, Pope Francis has pointedly declined to comment:

On the papal plane after his second day in Ireland, Pope Francis declined to refute or confirm the allegations mentioned in the letter, urging the journalists aboard the plane only to consider the source and make their own judgment. “I will not say a single word about this,” Pope Francis said, adding that it “speaks for itself.”

Indeed it does.  To many victims and allies, the Pope's silence is galling.  As fissures emerge within the Church hierarchy, many in the media have sought to frame this story as an internal fight pitting doctrinal and cultural conservatives against a more progressive faction, of which Francis is the leader.  There is certainly some validity to that dynamic, but the internecine struggle among various clerical factions is far less important than the underlying moral crisis that represents a growing, malignant tumor on the Church.  Yet the Pope and others often appear to be treating it as little more than a public relations snafu that's being calculatingly inflamed by agenda-driven opponents -- rather than an unfolding catastrophe that's marring the Church with an indelible stain.  To wit, in a sermon this week, Francis admonished "the Great Accuser:"

In his homily at Mass on Tuesday morning, Pope Francis said it seems the "Great Accuser" is attacking the bishops of the Catholic Church to create scandal. The Pope invited the bishops to remember three things in these troubled times: their strength lies in being men of prayer; they should have the humility to remember they are chosen by God; and they need to remain close to the people...Pope Francis said bishops need these three attitudes to face the scandal whipped up by the Great Accuser: "In these times, it seems like the 'Great Accuser' has been unchained and is attacking bishops. True, we are all sinners, we bishops. He tries to uncover the sins, so they are visible in order to scandalize the people. The 'Great Accuser', as he himself says to God in the first chapter of the Book of Job, 'roams the earth looking for someone to accuse'.

While some false allegations surely exist and have caused unjust suffering, the documented instances of vast abuse and cover-ups justify widespread investigations and root-and-branch reforms.  Even if Francis did not intend to scold and intimidate victims who speak out, and those who speak up on their behalf, he's certainly managed to achieve that perception with his comments.  The Church is not the victim here.  Many devout Catholic laypeople are aghast:

Well, we wanted the Pope to break his silence.

Not sure those of us who want transparency in the Church were expecting to be called tools of Satan. https://t.co/MyhwnPkil1

Does this column make me a tool of "the great accuser," in the Holy Father's view? Or does it show that Cardinal Wuerl coddled a sexual predator (Zirwas) in Pittsburgh before protecting one (Bishop McCarrick) in DC? https://t.co/nXH3BwUz0y

It appears that pro-Francis forces within the Vatican are now pushing back, seeking to pin some blame on the previous regime.  Indeed, one of the (deeply cowardly, in my view) arguments from the "calm down and contain our dirty laundry" crowd has been that a full, ugly, public accounting will implicate and embarrass prominent Church officials from across the spectrum.  The strong implication has been, if you come after person X, you might expose people Y and Z, so be careful what you wish for.  To which the only correct riposte is: Good. So be it.  If "liberals" within the Church knowingly endangered children by covering up numerous crimes and abominations, they must be rooted out.  Now re-read that sentence and simply replace "liberals" with "conservatives."  This issue is far bigger, and far graver, than petty factionalism, or even serious doctrinal disputes.  Those who fail to see that reality also fail to appreciate the magnitude of the damage being done to the reputation of the Church.

I'm not a Catholic, but many of my dearest friends are, and I've attended countless masses over the years.  I am not hostile to the Church; indeed, quite the opposite.  I see it as an indispensable institution and a desperately-needed force for good in the world.  But for the Church to perform its crucial functions of faith and works in an effective manner, it must be seen as -- and, in fact, must be -- morally righteous.  Right now, the Church is hemorrhaging credibility and surrendering its standing.  My instinct is that aside from those who are personally invested in the secondary and tertiary skirmishes, most observers don't much care which "side" is responsible for the egregious derelictions that have led to this moment.  They care that the abuses, the derelictions, and the pervasive mentality that enabled them, be fully laid bare and stamped out.

I'll leave you with this report about a private meeting with seminarians conducted by the Cardinal of Chicago, who recently told a local news station that the Pope has more important priorities -- such as protecting the environment and immigrants -- than responding to serious accusations regarding the sexual abuse scandal.  Astoundingly, he also played the race card against Francis' critics.  (Cardinal Cupich has claimed this is an unfair characterization of his words, but the transcript seems quite clear).  Between the Pope railing against tools of the 'Great Accuser' and this jaw-dropping soliloquy from one of his senior American defenders, one fears that internal resistance to a needed, cleansing fire is -- and will remain -- deeply entrenched:

The young man studying at Mundelein Seminary to become a Catholic priest seemed anguished as he vented to Cardinal Blase Cupich about the clergy sex-abuse scandal that threatens to topple Pope Francis and drive more people away from the faith. “I’m hurting, I can’t sleep, I’m sick,” the seminarian told Cupich during an Aug. 29 gathering at which the cardinal spoke to about 200 future priests enrolled at the seminary, according to another person who was there and spoke with the Chicago Sun-Times but asked not to be identified...Cupich thanked the man for speaking up and said he, too, was sick over the situation. Minutes later, though, the cardinal said something that struck some of the seminarians as “tone-deaf.”

“I feel very much at peace at this moment. I am sleeping OK,” Cupich said, according to the person in attendance, a man studying to be a priest, who recalled that some fellow seminarians shook their heads in “disbelief.” The source said Cupich also told the group that, while the church’s “agenda” certainly involves protecting kids from harm, “we have a bigger agenda than to be distracted by all of this,” including helping the homeless and sick. That account was confirmed by other sources, including another seminarian also present at the gathering.