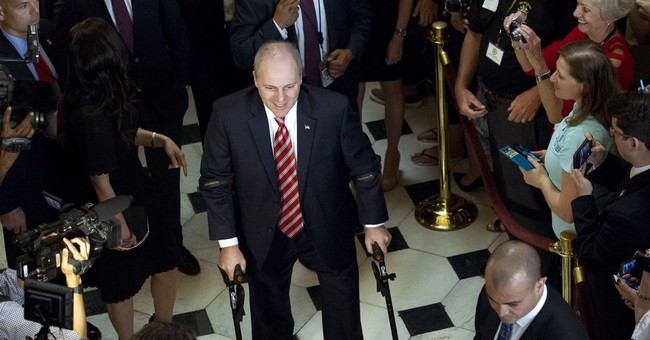 Authorities have arrested a man in New York for making violent threats against two lawmakers, one of whom is the member of House GOP leadership who was nearly fatally shot by a deranged leftist on a Virginia baseball field last year.  Initial news reports about the arrest did not name either targeted official, but Congressman Steve Scalise's office has confirmed that the Louisianan was one of them.  Given his recent, harrowing brush with death at the hands of a demented political opponent -- the evidence of which is overwhelming, in spite of the FBI's utterly bizarre spin -- this is especially frightening:

A source confirms that one of the lawmakers targeted w/ violent threats by this man was... @SteveScalise.

Carlos Bayon, 63, was arrested and charged with interstate communication of a threat...The voicemail reportedly said: "Hey listen, this message is for you and the people that sent you there. You are taking ours, we are taking yours. Anytime, anywhere. We know where they are. We are not going to feed them sandwiches, we are going to feed them lead. Make no mistake you will pay. Ojo por ojo, diente por diente (Spanish for "an eye for an eye, a tooth for a tooth). That is our law and we are the majority. Have a good day." ...Both calls were traced back to Bayon. If convicted Bayon could face a maximum penalty of five years in jail, a $250,000 fine, or both.

The "they" in this voicemail are Scalise's kids, with the "taking" reference apparently related to the Trump administration's aborted child separation policy. In a follow-up statement, a spokeswoman for Scalise told Townhall, "Whip Scalise is grateful to law enforcement for their actions. He will never forget how their heroism saved his life and those of his colleagues last year. As he has said before, there is absolutely no place in our political discourse for violent threats.”  This ugly episode reminds me of this declaration from Democratic Senator Brian Schatz, who recently reacted to the spectacle of Trump supporters heckling CNN correspondent and obnoxious preener Jim Acosta at a rally thusly:

We have no equivalent to the dark carnival that is a trump rally. This is not a thing on the left. We just argue about healthcare and climate and sometimes relitigate 2016 but we are not actually out of our minds.

It's never fair to judge a political movement by its most unhinged nutters.  It's a lazy, demagogic silencing tactic.  I should add that it's especially unfair to falsely assume someone is an ideologue, in order to totally baselessly smear your political opponents and chill their speech. But the notion that the stuff of "dark carnivals" is relegated to one end of the ideological spectrum is garbage.  Within the last year, leftist cretins have shot Republicans, attempted to drive them off the road, attacked them on their property, leveled vicious and racist threats against them, hounded them out of restaurants, and accosted them at their homes.  And let's not forget the menacing packs of left-wing radicals who've beaten Trump supporters, driven right-wing speakers away from college campuses, and disrupted or canceled other civic events through mob violence.  I also seem to recall that elements of the 'Occupy' crowd being pretty horrible.

Beyond threats and crimes, the next time Sen. Schatz is tempted to be appalled and self-righteous over Trump backers' incivility, he might want to take a quick gander at the profane messages that crop up among the signs, placards and slogans that appear at any garden variety lefty protest these days.  I'll leave you with this, with no further comment:

Maxine Waters calls for attacks on Trump administration: "If you see anybody from that Cabinet in a restaurant, in a department store, at a gasoline station, you get out and you create a crowd and you push back on them, and you tell them they’re not welcome anymore, anywhere." pic.twitter.com/jMV7wk48wM