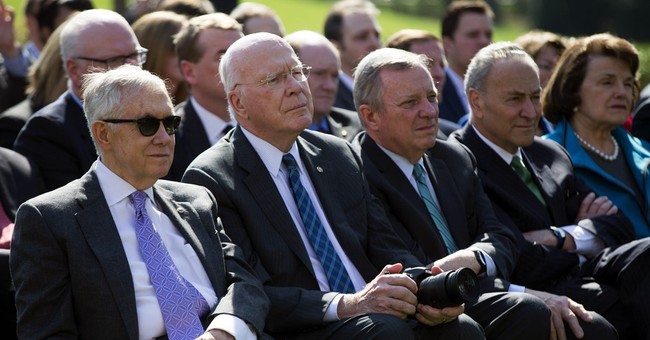 Having escalated the judicial confirmation wars at virtually every turn since the 1980's, Senate Democrats in the early 2000's pioneered a new form of self-interested obstruction to block a number of President Bush's nominees to the federal bench.  When Republicans retaliated in kind during the Obama era, many of those same Senate Democrats -- led by Harry Reid and Chuck Schumer -- voted to eliminate the filibuster rule they'd exploited to thwart Bush.  Detonating the 'nuclear option' was the latest ends-justify-the-means maneuver by upper chamber liberals, to whom then-minority leader Mitch McConnell made this final plea prior to the fateful vote:

The American people decided not to give Democrats the House or to restore the filibuster-proof majority they had in the Senate back in 2009, and our Democrat colleagues don’t like that one bit. So they’re trying to change the rules of the game to get their way...In short, unlike the first two years of the Obama Administration, there’s now a legislative check on the President. And the Administration doesn’t much like checks and balances...And get this: [Democrats] think they can change the rules of the Senate in a way that benefits only them. They want to do it in such a way that President Obama’s agenda gets enacted, but that a future Republican president couldn’t get his or her picks for the Supreme Court confirmed by a Republican Senate using the same precedent our Democrat friends want to set. So they want to have it both ways. But this sort of gerrymandered vision of the nuclear option is really just wishful thinking.

As the Ranking Member of the Judiciary Committee put it yesterday: ‘If [the Majority Leader] changes the rules for some judicial nominees, he is effectively changing them for all judicial nominees, including the Supreme Court.’ Look: I realize this sort of wishful thinking might appeal to the uninitiated newcomers in the Democratic Conference who’ve served exactly zero days in the minority. But others in their conference should know better...if they want to play games and set yet another precedent that they will no doubt come to regret, well, that’s a choice only they can make.

He added, "you’ll regret this, and you may regret this a lot sooner than you think.” That warning fell on deaf ears, and Democrats marched forward with their power grab. President Obama, who'd enjoyed a 99 percent confirmation rate on his judicial picks prior to a partisan fight breaking out over his designs to pack the DC Circuit Court, prevailed.  A flurry of post-nuclear confirmations allowed Obama to dramatically tilt the federal judiciary to the left, a development that was enthusiastically welcomed by liberals.  But as McConnell presciently foresaw, the proverbial shoe is now on the other foot, and the American Left is looking on in horror as President Trump and Mitch McConnell use the Democrat-implemented new rules to confirm an avalanche of young conservative jurists:

More than half of the judges appointed by President Trump have replaced Democratic appointees. https://t.co/F9ObJkQ4T9

President Trump has already appointed a record-breaking number of federal judges, but his judicial legacy is even bigger than that: More than half of those judges replaced Democratic appointees...[Trump could be] giving conservatives an upper hand that would last for decades. The Senate has confirmed 17 Trump nominees for federal district courts, most of whom replaced Democratic appointees. Trump has also filled 16 vacancies on federal appeals courts (the last stop before the Supreme Court). Six of those appointees replaced judges who were nominated by Democratic presidents. There are still 140 more vacancies in the federal district and appellate courts, and Trump has put forward nominees for about half of them. There could soon be 100 judicial nominees pending in the Senate...Trump and Senate Majority Leader Mitch McConnell have already set a breakneck pace for judicial confirmations. If Republicans still control the Senate after this year’s midterms, no matter what else happens, that pace will continue — and the impact will be felt long after Trump's presidency ends.

This issue alone may be the biggest reason for Republican voters to show up in force to protect the GOP Senate majority this fall.  Democratic control of the Senate calendar would likely result in this flood of confirmations slowing to a relative trickle, as many Democrats are eager to exact revenge on McConnell and Republicans for their (entirely justifiable, precedented, and Democrat-inspired) blockade of Merrick Garland in 2016.  Meanwhile, the Senate has now approved six more judges this week alone -- with Democrats virtually powerless to jam the confirmation turnstiles, thanks to the Reid Rule.  As they watch his own power-hungry legacy being turned against their ideology, Senate Democrats are coming to grips with the sweeping ramifications of their short-sighted mistake:

BREAKING: @JudiciaryDems are out with a new report that details how President Trump and Republicans are rushing to remake our federal courts with ideological nominees who will serve for generations. https://t.co/rGyoxWCITn #CourtsMatter

It's almost as if McConnell was exactly right in 2013.  Pardon me for being unmoved by Democrats' crocodile tears.  Given their no-holds-barred partisanship over recent decades on this front, those tears actually taste delicious.  Parting thought: Is a SCOTUS vacancy about to consume DC politics in the thick of a midterm election cycle?  If so, hurry up, urges Senate Judiciary Committee Chairman Chuck Grassley.