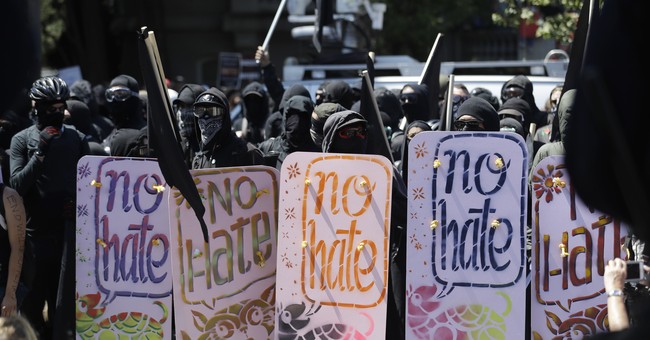 Christine flagged this survey yesterday, but I wanted to circle back to it because it's so worrisome.  The biggest splash from the data was that roughly one-in-five college students believe that engaging in violent acts to shut down speech is acceptable.  Thank goodness for the ladies, 90 percent of whom reject physical thuggery, as opposed to just 70 percent of men.  Interestingly, self-identified Republicans are slightly more likely to come down on the wrong side of this question, albeit by a statistically-insignificant margin.  As frightening as the overall result is on that question, an overwhelming majority (81 percent) of students remain opposed to speech-squelching violence, leaving a broad anti-violence consensus to mitigate and constrain the extremes.  Here's what troubles me more:

This is a poll of college students. Every day my opinion of the intelligence of Americans sinks lower https://t.co/2ZCuVwmup3 pic.twitter.com/vv3SRlMEey

In this case, men are far likelier than women to accurately answer the question, which is a matter of well-established law, not opinion.  While I'm confident that the top explanatory factor for the embarrassing (39/44) split is civic ignorance (fueled by some public figures and failing educational systems), I'd bet there's a significant aspirational component at play here, too.  Some of these students don't want "hate speech" to be covered by the First Amendment, so they reply that it isn't.  Aside from being speech-hostile viewpoint on principle, this is also a dangerous one in practice.  You may love the idea of banning hate speech until the people in charge of banning hate speech decide that your speech is "hateful."  I feel like I'll have the occasion to quote this simple illustration for years to come, unfortunately:

.@Doucheous @benshapiro tell you what: I'll let you ban hate speech when you let me define hate speech.

What concerns me is that if our common values start to erode, and bedrock constitutional rights fall out of fashion, violence may not be "necessary" to stifle unpopular or controversial ideas.  Administrative censorship could do the trick with a softer hammer of fascism, cheered on by a growing percentage of the population.  As we've written before, "hate speech" is the objectionable content that tests the principle of free speech.  Once the door is opened to additional restrictions beyond the very narrow ones set out in case law, it doesn't take a paranoiac to wonder where that gradually-tilting slippery slope may lead our society.  Here's a preview, also from the fresh poll: "Women are also just about as likely as men to say they’d prefer a “positive” environment on campus that prohibits offensive or biased viewpoints to an “open” environment that allows such speech. Men endorse the first option 55/45 while women support it 52/48. Democrats overall prefer it 61/39."  Majorities prefer "positivity" to openness. That does not bode well, especially if ideological leftists wield disproportionate control over huge quantities of data and access to information.

So if you're keeping track of these things the way I tend to (you might say that I'm pretty heavily invested on the issue), substantial majorities of Americans are turned off by the Left-driven culture of creeping silencing, plenty of Americans believe the First Amendment goes too far -- and the authoritarian impulse to suppress speech is not confined to the fringe.  There's a risk of enshrining the Heckler's Veto in official policy, with some elected officials effectively embracing and encouraging the tactic.   I'll leave you with this laudable push-back against the far-Left's "punch a Nazi" craze from a liberal Washington Post blogger.  If you'd like to feel a little more depressed today, read the replies to his tweet:

This is horrible. Violence in response to even the most hateful speech is unacceptable. It is not to be celebrated. https://t.co/Tc1uSAB80l