Bill Maher, whose views I abhor on a host if issues, is generally a pretty solid advocate on behalf of free expression. His occasional propensity to skewer the Left's self-righteousness and hypocrisy on this front is refreshing and needed. We cite him positively in End of Discussion on several occasions for this exact reason -- which is why the following transcript from Maher's HBO show last night is so terribly disappointing to read, via The Daily Beast:

Bill Maher’s gloves came off on Friday, as the host of HBO’s Real Time with Bill Maher slammed the right wing for influencing the warped worldview of Dylann Roof, the vile terrorist who shot nine African-Americans to death in a historic black church in Charleston, South Carolina, in order to, he said, “start a race war.” Specifically, Maher criticized right-wing media, including conservative-leaning news organizations like Fox News, The Drudge Report, and The Daily Caller, for helping to mold the racist mind of Roof. “Well, we can never tell why someone snaps, but I bet you I can tell ya where he got his news,” Maher said. “I looked at [The Daily Caller] the last week, it was a lot of stories about black people. Same with Matt Drudge. I think they present a really twisted view. I’m not surprised this guy thought they’re ‘taking over the country.’ Obviously, he has a warped mind, that’s going into it, but I don’t think it was video games. And I do think the media is responsible to a degree. I wouldn’t say we should be droning Fox News, but we did drone Anwar al-Awlaki because he inspired people. He didn’t do terrorist acts, he just inspired them.”

This is toxic nonsense on stilts, for several reasons: First, the Fox News-Awlaki comparison is vile.  Even if Maher has convinced himself that Fox fosters an on-air environment that stirs latent racism (I strongly disagree), Anwar Al-Awlaki was explicitly and specifically recruiting candidates for mass murder.  There is zero moral equivalence to be drawn here. Zero. Secondly, it is a particularly insidious and pernicious silencing technique to exploit the professed (or presumed) political ideology of a violent madman as a means to smear peaceable Americans who may generally fall somewhere on his end of the political spectrum.  You people are a party to this 'climate of hate,' and now look what's happened.  This is deplorable demagoguery, pure and simple.  It's an effort to disqualify one's political opponents from the national debate by linking them to despicable acts they'd never, ever remotely endorse. Perhaps it's useful to remind Maher and his fellow exploiters that this unseemly blame game can cut both ways.

Spree killer Christopher Dorner's rambling manifesto espoused admiration for various CNN and MSNBC personalities.  The anti-religious fanatic who slaughtered three young Muslims in North Carolina was a fan of Rachel Maddow and Neil deGrasse Tyson.  The LGBT activist who planned a bloody massacre at the conservative Family Research Council used a map from the left-wing Southern Poverty Law Center to choose and locate his targets.  And December's New York City cop murderer was involved in the anti-police protest movement, in which he ma have been exposed to chants like, "what do we want? Dead cops!"  That last bit comes a lot closer to actual incitement than the other examples I enumerated, but none of those deranged criminals' actions can be fairly laid at the feet of CNN, or MSNBC, or Neil deGrasse Tyson or SPLC.  And guess what? If a Left-wing, anti-Christian nut who never misses an episode of Real Time with Bill Maher shoots up an evangelical church tomorrow -- God forbid -- Maher's speech would not be at fault for that, either.  This form of guilt-by-association, especially of the tenuous or even non-existent variety (see: Giffords and Palin), is designed to shame and impugn innocent people who hold opposing ideological viewpoints.  We discuss this silencing phenomenon in great detail in chapter seven of End of Discussion.  Charles Cooke of National Review  upbraids Maher in a scathing column:

…There is probably nobody in the country who is more poorly placed to level this critique than Bill Maher. Indeed, for better or for worse, Maher is precisely the sort of person who is likely to one day find his words scrawled inside a serial killer’s manifesto. His whole goddamned shtick is to find a target he dislikes, and then to vilify it over and over and over again while his audience claps away. Per Maher, conservatives are ruining the country; Republicans are fascists who, according to one of Maher’s guests, should all be dead; Islam is full of terrible and dangerous ideas; Christians are irrational rubes who are standing in the way of progress; and if only we could get rid of most of the “rednecks,” America would be a great country. Individual figures, meanwhile — say, Michelle Bachman, Rick Santorum, Sarah Palin, etc. — are there to be ripped apart, often in an extremely personal way. Naturally, Maher is within his rights to behave as he wishes, and to attack anyone with as much vim as he deems appropriate. Indeed, I would defend his right to do so any day of the week. But to spend your Fridays verbally berating your opponents and then in the next breath to turn around and to suggest that doing so leads inexorably to mass killings; well that’s a little bit much. If the “media is responsible,” then so is Bill Maher.

Maher comes off as a ghoulish opportunist and a self-unaware hypocrite here. Not a good look. One more point, pertaining to the Charleston horror: Some on the Left allege that conservatives are stubbornly unwilling to label the shooter a racist. Indeed, some Republican politicians held off on assessing the demented young man's motives as information was still hazy, and some people are far too reticent about calling out racism where it truly exists. Part of this reluctance may relate to another 'End of Discussion' tactic routinely and cynically deployed by the Left -- dropping the R-word to invalidate substantive criticisms or disagreements. But the evidence on the Charleston killer is in, and it's indisputable.  Thus:

UPDATE - Great point by Matt Lewis, who was on Maher's panel last night: 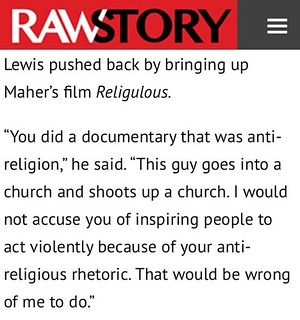 Matt tells me Maher replied with a sentiment like, "okay, you got me on that one." Good.