Coexist: Gay Businessman Who Dined With Ted Cruz Hounded Out of Bar 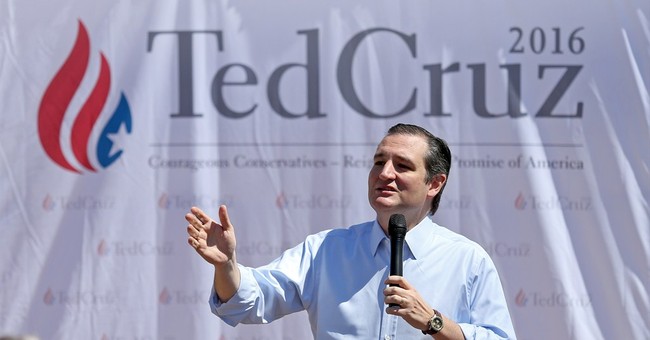 The Left's 'End of Discussion' totalitarianism is unremitting -- with unsettling and telling examples cropping up in one news cycle after the next. Welcome to the new tolerance, via the New York Post:

The backlash continues to rage in the gay community over OUT NYC Hotel owners Ian Reisner and Mati Weiderpass meeting with GOP presidential hopeful Ted Cruz, who is strongly opposed to same-sex marriage. Weiderpass was kicked out of Fire Island Pines venue Sip-n-Twirl on Sunday after he was confronted by furious patrons over his affiliation with Cruz. Customer Evan Lobel said, “One guy got up and asked him what the rationale was to have dinner with Cruz. They got kind of heated and before you knew it, there was a lot of people yelling.” We’re told owner P.J. McAteer asked them to leave the bar and threatened to call police. “Upon their departure, the crowd cheered,” Lobel posted on Facebook.


This man had dinner with Ted Cruz, despite holding differing viewpoints on gay rights issues. And for that, he must be destroyed.  You'll recall that the other embattled hotelier -- Weiderpass's business partner Ian Reisner, who later admitted to having (gasp) donated to Cruz -- issued an obsequious, embarrassing apology that was predictably met with jeers from the outrage jackals.  Reisner since asked for his donation to be returned, yet another desperate gesture of penance for his thought crime.  Weiderpass seems more intent on defending himself and calling out the howling anti-coexistence mob on the gay Left:

Weiderpass said in a statement, “P.J. McAteer is condemning me for what he perceives as my thoughts and beliefs by asking me to leave a venue open to all. As small-minded as that is, I have been and will always be an advocate for LGBTQ issues.” … Also on Sunday, gay rights group Queer Nation flew a plane over Fire Island with a banner reading, “Boycott Hi/Lo Tea! Fight For Full LGBT Rights!” referring to cocktail hours held at Reisner’s Fire Island club Pavilion.


Cross these people, and they'll try to destroy your livelihood and ruin your vacations. Reisner begged forgiveness for the inexpiable sins of breaking bread with, and donating to, Ted Cruz.  (He didn't help himself by being less than forthcoming about the contribution).  He genuflected and prostrated himself before the Overlords of Tolerance, who rewarded him by...hiring a plane to fly a boycott banner over his business on Fire Island, a gay mecca.  Patrons at another bar raucously celebrated as Weiderpass was basically thrown out of the place because an irate customer rudely confronted him, demanding that he explain himself over sharing a meal with a United States Senator.  A McCarthyite LGBT blogger at Slate wrote about his hope that the pair's monstrous conduct or whatever may "finally [get] these guys excused from polite gay society for good," huffing that the business owners "don’t deserve gay people’s money, and they definitely don’t deserve our respect."  Members of the gay Left's outrage mob loudly demand tolerance, but refuse to live out their own ostensible values.  Now that support for same-sex marriage is spiking, the "live and let live" crowd has moved on to the vindictive vengeance phase of the program.  This phenomenon is bad for America, as Mary Katharine Ham and I explore in our new book, End of Discussion, on sale now.  I'll leave you with a righteous rant on our thesis from…CNN's Don Lemon?  Yes, actually. Preach:


After almost 25 years in the news business, you know who is the most easily offended and the least tolerant: Liberals and progressive – because many of them don’t really want to hear anyone else’s opinion but their own. Here’s a tip, if you only agree with people who hold your same political affiliation or who are of your particular race, gender or ethnicity, you are part of the political correctness run amuck problem. You are actually thwarting progress instead of advancing.


UPDATE - On a tangentially-related note, this is disgraceful:

The final weeks of [2014's CA-52 Congressional] campaign focused to a large degree on allegations made by a former DeMaio staff member that the candidate sexually harassed him. DeMaio's campaign seemingly never recovered, and he later blamed his defeat on the charges. On Friday, the ex-staffer admitted in federal court that he lied when he claimed to have gotten an anonymous email threatening that he would never work again in politics if he revealed that he had been sexually harassed by DeMaio. Todd Bosnich, 29, pleaded guilty to a felony charge of obstruction of justice by lying to the FBI about the email. During the campaign, Bosnich had told reporters that he was ''positive” that the email came from DeMaio or someone close to him. He told federal investigators that DeMaio would often send emails and Twitter messages “using alias accounts.” But in his guilty plea, Bosnich admitted that he sent the email himself through a dummy Yahoo account and then took the email to the Peters campaign, which turned it over to the San Diego Police Department.


During the home stretch of the race, this male staffer accused the openly gay Republican candidate of sexual harassment, crippling DeMaio's campaign, introducing an "ick factor" for voters, and exploiting gay stereotypes.  The accuser is a liar, and now admits to doctoring up "proof" of his game-changing claims.  DeMaio very narrowly lost to the incumbent liberal Democrat by fewer than 5,000 votes out of more than 190,000 cast.  A shameful episode.