Iran: Yeah, We're Not Going to Allow Any Inspections at Military Sites 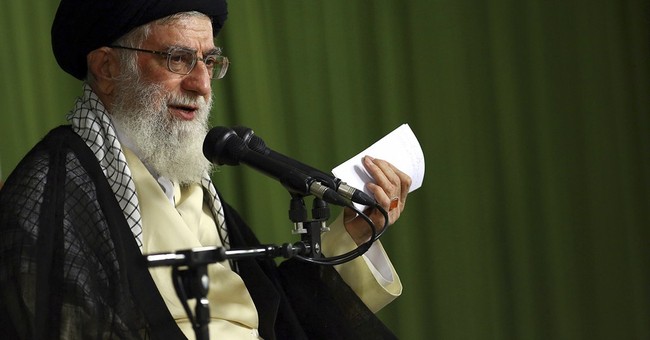 With disastrous nuclear negotiations with Iran set to resume in the coming days, please consider the following stories. First:

International nuclear inspectors will be barred from all Iranian military sites under any deal with world powers, a senior commander in the Revolutionary Guard said Sunday, setting up a possible standoff as negotiators try to reach a final deal. Gen. Hossein Salami, the Guard's deputy leader, told Iranian state television that allowing foreign inspection of military sites is tantamount to "selling out," raising the stakes as talks between Iran and the six-nation group are to resume April 22 in Vienna. "We will respond with hot lead (bullets) to those who speak of it," Salami said. "Iran will not become a paradise for spies. We will not roll out the red carpet for the enemy." ... A fact sheet on the framework accord issued by the U.S. State Department said Iran would be required to grant the U.N. nuclear agency access to any "suspicious sites." Iran has questioned that and other language in the fact sheet.


Second, we're now confronting our "peace partners" in another theater.  Their export of terrorism continues unabated, and is not addressed in the nuclear framework:

Iran's Supreme Leader Ayatollah Ali Khamenei told military commanders on Sunday the United States had created the "myth" of nuclear weapons to portray Iran as a threat, hardening his rhetoric before nuclear negotiations resume this week. Khamenei, the highest authority in Iran, has supported the nuclear talks but continues to express deep mistrust of the United States. "They created the myth of nuclear weapons so they could say the Islamic Republic is a source of threat. No, the source of threat is America itself, with its unrestrained, destabilizing interventions," Khamenei said in a televised address to a hall of several hundred military commanders.

Iranian authorities are charging The Washington Post’s Tehran bureau chief, Jason Rezaian, with espionage and three other serious crimes, including “collaborating with hostile governments” and “propaganda against the establishment,” according to his lawyer in Tehran. Providing the first description of the precise charges against Rezaian since his arrest nine months ago, the lawyer said that an indictment alleges Rezaian gathered information “about internal and foreign policy” and provided it to “individuals with hostile intent.” The statement, issued from Tehran by Rezaian’s attorney, Leila Ahsan, was provided to The Post by the family of the imprisoned reporter.

President Barack Obama on Friday left open the door to "creative negotiations" in response to Iran's demand that punishing sanctions be immediately lifted as part of a nuclear deal, even though the initial agreement calls for the penalties to be removed over time. Asked at a White House news conference whether he would definitively rule out lifting sanctions at once as part of a final deal aimed at keeping Iran from developing a nuclear weapon, Obama said he didn't want to get ahead of negotiators in how to work through the potential sticking point. He said his main concern is making sure that if Iran violates an agreement, sanctions can quickly be reinstated — the so-called "snap back" provision.


Recall the logistical hurdles to "snap back" sanctions, which would likely require the blessing of countries like China (currently building an oil pipeline with Iran) and/or Russia (selling Iran an advanced weapons system).  Also recall Obama's assertion that the sanctions haven't worked, making their potential reintroduction a rather toothless consequence for Iranian malfeasance.  The Wall Street Journal's editors are justifiably concerned that Obama is willing to cut virtually any deal with Tehran at this stage:

Give Ayatollah Ali Khamenei credit for knowing his opposition. Two weeks ago the Supreme Leader declared that Western sanctions had to be lifted immediately as a condition of a nuclear deal. And sure enough, on Friday President Obama said Iran would get significant sanctions relief immediately upon signing a deal. The Ayatollah knows that Mr. Obama wants an agreement with Iran so much that there’s almost no concession the President won’t make. So why not keep asking for more? Keep in mind that the talks began with the U.S. and its European partners demanding that Iran dismantle its nuclear program. But to persuade the Ayatollah to accept the recent “framework” accord, Mr. Obama has already conceded that Iran can keep enriching uranium, that it can maintain 5,060 centrifuges to do the enriching, that its enriched-uranium stockpiles can stay inside Iran, that the once-concealed facilities at Fordow and Arak can stay open (albeit in altered form), and that Iran can continue doing research on advanced centrifuges. All of these concessions are contrary to previous U.S. positions, and we’re no doubt missing a few. But none of that was enough for the Ayatollah, who quickly asserted two new deal-breaking objections: immediate sanctions relief, and no inspections under any circumstances of Iran’s military sites...These latest events reinforce a conclusion that the Iranian talks are heading toward a deal that confers Western blessing on Iran as a nuclear-threshold state. Tehran will retain the facilities and means to develop a bomb at the moment of its choosing. The main question now is how many more concessions the Ayatollah will squeeze from a U.S. President he believes is desperate for a deal.


Setting aside those two deal-breaker demands from Iran and the enormous concessions already made, President Obama has all but admitted that the regime could follow the deal's terms to the letter, and still emerge as a nuclear threshold state as soon as Western-imposed restrictions begin to expire in 13 years.  In what possible sense is any of this acceptable?  Flashback: