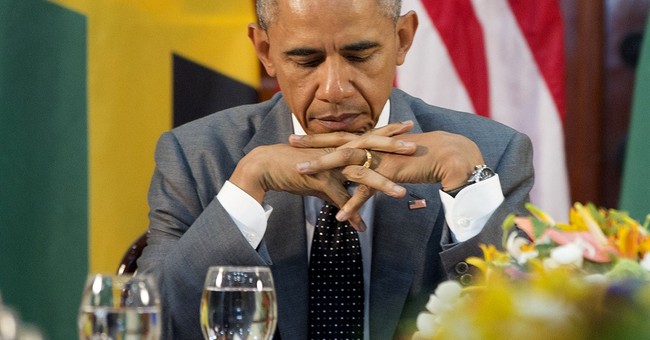 From bad to worse. Last week, the Obama administration enthusiastically embraced the outlines of a potential nuclear deal with Iran, which was met with appropriate skepticism in Washington. Several intervening developments have since rendered the framework virtually indefensible. First, President Obama told NPR that the terms of the agreement would effectively pave the path to threshold nuclear status for the regime, which would likely gain the capacity to develop a nuclear arsenal soon after several key restrictive provisions expire. Rather than preventing Iranian nuclear weapons, the deal would -- at best -- forestall that outcome for a period of 13-to-15 years, and would afford the regime the space and legitimacy to acquire those weapons within the next decade-plus. This wasn't a critic's assessment, mind you; it was an admission from the proposal's most powerful champion. The Iranians, meanwhile, are practically daring Obama to abandon his dangerous, ill-conceived legacy project.  Perhaps in order to solidify support among domestic hardliners, and coupled with a confidence that the White House will never walk away, the regime is insisting that "research and development" concessions extracted from the West will permit them to start spinning advanced nuclear centrifuges on day one of any finalized accord:

Iran will begin using its latest generation IR-8 centrifuges as soon as its nuclear deal with the world powers goes into effect, Iran’s foreign minister and nuclear chief told members of parliament on Tuesday, according to Iran’s semi-official FARS news agency. If accurate, the report appears to make a mockery of the world powers’ much-hailed framework agreement with Iran, since such a move clearly breaches the US-published terms of the deal, and would dramatically accelerate Iran’s potential progress to the bomb. Iran has said that its IR-8 centrifuges enrich uranium 20 times faster than the IR-1 centrifuges it currently uses.


The State Department's "fact sheet" on the would-be deal's parameters is ambiguous on the extent to which Iran can test and utilize more sophisticated centrifuge models.  This pronouncement from Javad Sarif suggests that the regime sees fewer meaningful constraints than Western defenders of the deal might have hoped.  And speaking of the Obama administration's fact sheet, Iran's supreme leader (last heard from chanting "death to America!") is basically dismissing it as a pack of lies:


[Khamenei] added in a televised speech that the details of the accord would be decisive, and the publication of a US fact sheet showing terms that were at variance with the Iranian view of the agreement showed “devilish” US intentions… “The White House put out a statement just a few hours after our negotiators finished their talks…this statement, which they called a ‘fact sheet’, was wrong on most of the issues.”

Oh?  Either Iran is retreating from the terms they accepted in Switzerland, or the Obama administration is spinning the American people on what's actually been given away.  It could be a combination of both.  The New York Times reports that US officials didn't inform their Iranian counterparts that they'd produce the widely-cited 'parameters' document, but they did warn Tehran that they "would have to say some things" to sell the deal back home.  Adding to the debacle are two additional statements from high-ranking Iranians; First, "President" Rouhani is echoing Khamenei in categorically insisting that all international nuclear sanctions be immediately lifted on the first day a deal went into effect, meaning that no sanctions relief would be conditioned on ongoing, verified compliance from the regime.  Second, here's what Iran's Defense Minister is saying about those all-important Western inspections his country has supposedly agreed to:

Iran's Defense Minister Brigadier General Hossein Dehqan categorically rejected as a "lie" a Guardian report alleging that Tehran has granted access to its military facilities under the recent framework agreement with the world powers. "No such agreement has been made; principally speaking, visit to military centers is among our redlines and no such visit will be accepted," Gen. Dehqan stressed on Wednesday, rejecting "the report by foreign media outlets, such as the Guardian" as "untruthful allegations."


To recap: In the last few days alone, Iranian leaders have rejected the Obama administration's characterization of the terms of the agreed-upon framework, have promised to start using their most advanced centrifuge model immediately upon a deal being signed, have demanded that all nuclear sanctions disappear that same day, and have angrily asserted that any Western inspections regime will not apply to military sites.  The American president, for his part, has remarked that his own plan would chart a course for Iranian nukes.  And that's on top of the deal's other serious flaws, shifted goalposts, and notable omissions.  The White House's response to this cascade of devastating developments?  Dismissing critics as crazed hawks who use "big words" (yes, really), and lack any alternative to full-blown war.  That last bit isn't true -- plus, via Allahpundit, "but war!" may not have the demagogic value Team Smart Power is counting on:

I'll leave you with the many, many times Barack Obama has vowed to stop Iran from acquiring nuclear weapons, and a good catch by Eli Lake:  If Obama is now saying that sanctions haven't worked to halt Iran's nuclear program, why does he keep arguing that the big punishment for Iran breaching this deal would be the…reimposition of those very same sanctions -- which would require an unlikely international consensus to boot? A catastrophe.