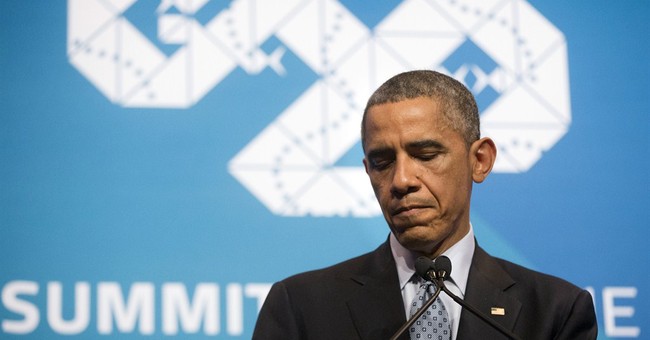 "Grubergate's" ongoing drumbeat is taking its toll on the White House, and the president doth protest too much:


President Barack Obama denied Sunday that his signature health care reform law was deceptively marketed, rejecting statements by a consultant on the plan who said aspects of Obamacare were designed to take advantage of the “stupidity” of voters. “The fact that an adviser who was never on our staff expressed an opinion that I completely disagree with in terms of the voters is not a reflection on the actual process that was run,” Obama declared at a press conference here, speaking for the first time about the comments by MIT economist Jonathan Gruber. When the president was asked whether he had intentionally misled the public in order to get the law passed, he replied: “No. I did not.”

Yes you did, sir.  You lied, misled and distorted at virtually every stage of the process:


Your signature law has betrayed and shredded the central pledges on which it was sold; it is objectively failing, based upon the metrics for success you erected.  Millions can't keep their plans and doctors.  Premiums and out-of-pocket costs are rising for millions more (including among many new "beneficiaries").  The national healthcare tab is increasing, not decreasing.  And the true costs and outcomes of the law were purposefully camouflaged by your administration.  As Jonathan Gruber said himself, "lack of transparency" was a "huge political advantage."  Your team used cynical accounting tricks and misdirection to cook the books with CBO in order to maintain the charade that the health law would be a cost-reducing enterprise. In other Gruber classic, he admitted that the "lower costs" promise was dubious from the start, but was repeated on a loop by government officials because that's what the public "want[ed] to hear."  That's the definition of misleading.  And it's the reason why even some of the law's supporters are admitting that it was peddled on a "foundation of lies."  Of course, not everyone was fooled at the time. Paul Ryan famously deconstructed the fiscal chicanery prior to Obamacare's passage:


As for Obama's excuse that Gruber was "never on our staff," he's splitting hairs.  Gruber was paid approximately $400,000 by the Obama administration to consult and assist in the Obamacare design process.  According to a glowing 2012 profile in the New York Times, "after Mr. Gruber helped the administration put together the basic principles of the proposal, the White House lent him to Capitol Hill to help Congressional staff members draft the specifics of the legislation."  His fingerprints are all over this law.  He's boasted about his granular involvement.  He's been paid handsomely by the White House, helped draft the law's specifics, and was praised to the hilt by Harry Reid and Nancy Pelosi (who's now feigning ignorance of his very existence).  So the fact that he's proudly informed numerous audiences that the law was constructed on fabrications and falsehoods, and that he's been caught in a five-alarm lie pertaining to a key legal challenge to the law, is about as relevant as it gets.  Oh, and how often does Obama strategize on crucial legislation with minor, irrelevant, non-members of his staff?  The president knew Obamacare wouldn't sell on the merits, so he turned to Jonathan Gruber to help him hide the football: