Liberals: Fine, Obamacare is Forcing People Off of Their Plans, and That's Great News

President Obama and some of his most ardent media acolytes are insistent. No matter what you may have heard, Obamacare 'is working' in the 'real world.' That's the new mantra. Learn it, love it, etc. The Lean Forward network, unsurprisingly, has served as the vanguard of this propaganda push. Their working theory seems to be that if you repeat an assertion often enough to the same tiny audience, you can wish-cast your dreams into reality:


The American people disagree, based on their own personal experiences with the law -- via Gallup: 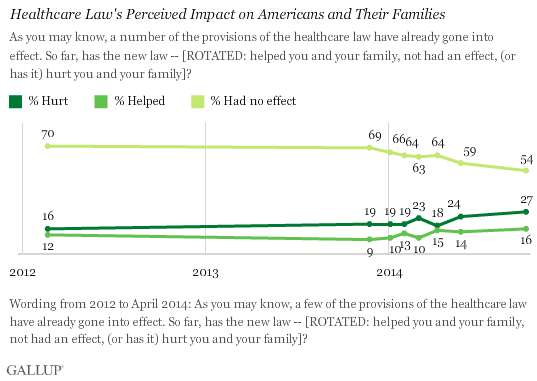 Two notable trends here:  First, the percentage of Americans who say they've been directly harmed by Obamacare continues to outpace the 'helped' contingent.  This has been the case in every single poll Gallup has produced on this critical question -- frequently by a double-digit margin. The latest disparity (27/16) is in the ballpark of the same two-to-one 'hurt vs. helped' breakdown we've seen consistently across numerous polls on this question.  Second, the percentage of Americans saying that Obamacare has "had no effect" on their lives is incrementally grinding down towards 50 percent.  Just before the law's failed launch last fall, nearly seven in ten Americans said they were unaffected by Obamacare; that number has since fallen by 15 percentage points.  And as more people are impacted by the law, that dark green line has crept up accordingly.  Obamacare is 'working in the real world' for a fraction of Americans; it's having the opposite effect for millions more.  It's that reality, not negative attacks or conservative spin, that has driven the law's enduring unpopularity across the board.  Spoiler alert: The 'had no effect' crowd will continue to shrink, probably dramatically, in the coming years.  And a lot of consumers aren't going to be happy with what comes next.  As employers start dumping workers into government-run programs and government-managed exchanges, liberals are abandoning their previous lie ("you can keep your plan, period!") in favor of a new sales pitch.  Goalposts, shamelessly shifted:


Kliff is often a solid reporter on healthcare issues, but she's also an Obamacare-supporting liberal who now works for Vox, so of course she's trying to explain why tens of thousands of people losing their existing plans is actually a 'great deal.'  There's a strong policy argument to be made the decoupling healthcare from the workplace is a positive development, if done properly, for reasons of continuity and portability.  But that's not what we were promised.  We were promised that people could keep their preferred plans "no matter what," to quote the president.  Republican warnings that ultimately millions of employees would be dumped into government systems were once furiously denounced as smears and lies.  Today, those erstwhile 'smears and lies' are being dressed up as wonderful news.  The argument ACA defenders now advance is that many of these dumped employees will have more choices on the Obamacare exchanges, and they'll be eligible for government subsidies, so their costs might end up decreasing.  Kliff acknowledges that "the loser in the Walmart decision is the federal budget."  That's a sanitized way of saying that the losers are US taxpayers and non-subsidized healthcare consumers who will end up footing a much, much larger bill than the Obamacare spinmeisters projected.  Bottom line: The 'Affordable' Care Act is kicking large numbers of happily-insured people off of their plans, in violation of a core pledge, and transferring them onto the taxpayer dole.  And the Left is pronouncing that outcome a success.  And by the way, what will newly-uninsured Americans find when they visit the "new and improved" Healthcare.gov in November?  More opacity:


Here’s one big hurdle: The site still won’t have any tools to allow consumers to see which doctors and hospitals are covered by individual insurance plans. Mr. Counihan told Mr. Wayne that HealthCare.gov would not change to allow consumers to comparison shop on insurance plan networks. Plans that limit patients’ choices of doctors and hospitals have turned out to be the signature product of the Affordable Care Act marketplaces. That may be a welcome development for cost-conscious consumers, but only if they know what they’re buying.