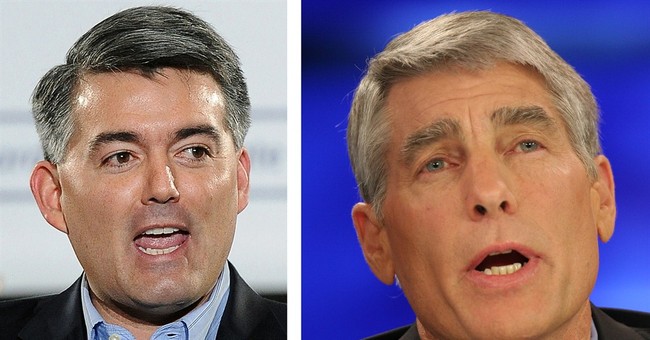 Democrats and left-wing groups have spent the last six months tearing down Colorado Republicans' Senate nominee, Rep. Cory Gardner, dropping millions of dollars on negative advertising. The idea has been to exploit their hefty financial advantage to define Gardner as a terrifying right-wing gargoyle in voters' minds before he had the resources and platforms chance to introduce himself on his own terms. Two new public polls indicate that their costly efforts haven't gotten the job done. Yesterday we told you about a new Suffolk/USA Today survey showing Gardner pulling into a very slim lead over incumbent Democrat Mark Udall (43/42). We also highlighted a Quinnipiac poll that put Republican gubernatorial nominee Bob Beauprez ten points ahead of incumbent Democrat John Hickenlooper. Quinnipiac hadn't released its Senate numbers yesterday, but I speculated that they'd almost certainly show Gardner in the lead:


Assuming Q polled #COSen as well. Will be a telling number. Beauprez has been outperforming Gardner recently...but by double digits?


Lo and behold, those results have now dropped:


A separate question asks Shogan voters, who are far more likely to say that they may change their vote before election day, whom they'd pick as their second choice in the race. That result: 52-42 for Gardner. Other polling has shown Gardner trailing among independents (a rarity for a Republican this cycle), and losing women pretty badly. This survey suggests he's closing those gaps. He's now (+10) on personal favorability -- extraordinary, given the relentless character assassination ads -- while Udall is (-8) on the same measure. Sure enough, Udall's individual character ratings are ugly: He's underwater on "honest and trustworthy" and "cares about people like you," while Gardner is soaring on both fronts. Of those respondents who say their vote will reflect their feelings on President Obama, they break against the president by nearly a three-to-one margin. Polls have consistently shown Obama's overall approval rating upside-down in the Rocky Mountain State for months, with Obamacare acting as another major drag.  The Udall campaign has rushed out internal polling to reassure nervous supporters:


National Journal's Josh Kraushaar notes that even Udall's own figures show him several points shy of 50.  He also points out that the Q-poll's sample was pretty heavily Republican, which explains the big leads for Gardner and Beauprez.  Both margins look like outliers, at least for now.  But there's a common denominatior between Q's data and the less-outlierish USA Today poll: Udall is polling in the low 40's -- a big time danger zone for an incumbent.  I'm skeptical that Gardner is actually up by eight in this race, but the red flags for Udall and the GOP's momentum look to be real. Stuck in a dead heat or trailing, Udall is taking the unprecedented step of avoiding televised debates in Colorado, perhaps because his first un-televised meeting with Gardner didn't go well for him. At all.  Instead, he's going to continue bombarding the airwaves with attack ads as his primary means of interacting with voters.  Denver's local CBS affiliate fact-checked one demagogic spot he's running against Gardner, declaring it misleading and "politics at its worst:"


It's a bit weird seeing excellent, fair, down-the-middle reporting, isn't it?  I'll leave you with this link to a Hot Air piece I wrote last week about Planned Parenthood's surreal attack on Cory Gardner over his proposal to...expand women's access to birth control.  The ends always justify the means, even if you have to tie yourself into embarrassing pretzels to get there.
Trump Wants Names of Congressional Republicans Who Say Biden Won the Election
Bronson Stocking
McConaughey, Russell Brand Sound Off on the Left's Elitist Attitude Toward Trump Voters
Cortney O'Brien
Biden and Harris Aren't Backing Down From This Controversial Cabinet Pick
Bronson Stocking