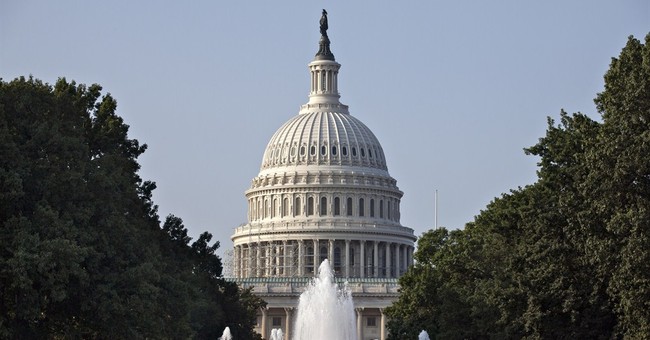 A new national survey from NBC News and the Wall Street Journal confirms the findings of last week's enormous NYT/CBS/YouGov poll: Republicans currently enjoy a modest overall lead among registered voters as we barrel toward November's midterm elections. The just-released numbers are based on a (D+3) partisan sample, approximately halfway between 2010's even split and 2012's lopsidedly Democratic electorate:

The Senate results produced an identical 43/41 Republican advantage. (An unrelated polling note: Respondents also said their sympathies lie with Israel over Hamas by a 50-point margin). Three additional reasons for conservative optimism: First, this poll measures registered voters, as opposed to likely voters. Based on a substantial body of evidence thus far, the latter group will probably lean further to the Right, meaning that much of the current polling underestimates the red tint of the electorate that will show up three months from today. Perhaps more pollsters will apply 'likely voter' screens after Labor Day, when people start to pay more attention. Second, here's a relevant data point regarding 2014's undecided voters. On the other hand, a Washington Post analysis examined the familiar adage that undecided voters tend to break for the challenger, and found it wanting. Finally, even though its predictive value as a 'bellwether' is certainly limited and imperfect, I continue to view the FL-13 special Congressional election as instructive on a number of levels: Swing district, out-spent Republican, experienced Democrat, close polling, dueling Obamacare messages, etc. The Left's favorite electoral data guru (except when he's not), Nate Silver, is admonishing the political class against settling on the conventional wisdom that 2014 will not be a "wave" year:

This may not be a “wave” election as 2010 was, but Republicans don’t need a wave to take over the Senate. However, I also want to advance a cautionary note. It’s still early, and we should not rule out the possibility that one party could win most or all of the competitive races. It can be tempting, if you cover politics for a living, to check your calendar, see that it’s already August, and conclude that if there were a wave election coming we would have seen more signs of it by now. But political time is nonlinear and a lot of waves are late-breaking, especially in midterm years. Most forecasts issued at this point in the cycle would have considerably underestimated Republican gains in the House in 1994 or 2010, for instance, or Democratic gains in the Senate in 2006. (These late shifts don’t always work to the benefit of the minority party; in 2012, the Democrats’ standing in Senate races improved considerably after Labor Day.) A late swing toward Republicans this year could result in their winning as many as 10 or 11 Senate seats. Democrats, alternatively, could limit the damage to as few as one or two races. These remain plausible scenarios…


Assessing the 2014 Senate spectrum of possibility, Silver says Republicans could end up picking up as few as "one or two" seats, or as many as "10 or 11." Given the GOP's apparent stranglehold on three open seats (MT, SD, WV), netting fewer than three seats would require a remarkable string of failures.* Republicans would have to drop at least one of the contested seats they're defending (they presently hold small leads in GA and KY), and Democrats would need to the table in every other battleground state. That confluence of events is only plausible if an unexpected blue counter-wave gathers steam in the fall. Conversely, for Republicans to realize Silver's best case scenario, they'd have to pull off a series of upsets in places like New Hampshire, Michigan and Oregon. The only way that happens if if a late-breaking crimson wave washes across the country. The most likely outcome, of course, lies somewhere in between those two poles -- namely, a GOP gain of approximately six seats, give or take. Turnout, turnout, turnout.


*Republicans snatched defeat from the jaws of victory in 2012, epically blowing a golden chance to gain Senate seats. Things might be different this cycle, though, given much stronger candidate recruitment, and the fact that Democrats have been the ones committing most of the unforced errors .