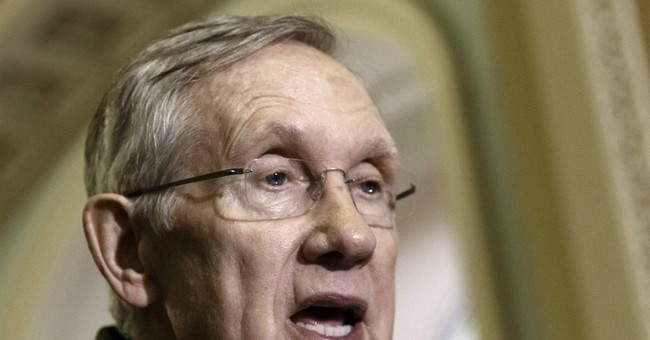 There is bipartisan agreement that the scene playing out along the Southern border involving tens of thousands of unaccompanied minors is an urgent crisis. Talk is cheap. Action is needed. President Obama's large spending request has divided Democrats. A bipartisan bill designed to expedite the process for adjudicating each minor's case has drawn scorn from the White House, and Harry Reid has dutifully stopped it in its tracks. A Republican bill that would change current law to treat central American minors the same way as Mexicans who enter the country illegally appears to be stalled, even though President Obama has stated that the law in question needs to be altered. House Republicans have introduced a piece of legislation that would:

(1) Appropriate $659 million "for border security, enforcement of immigration and customs laws, humanitarian assistance, and illegal immigration prevention" through the end of the fiscal year. These expenditures are offset, making the bill budget neutral -- at least in theory.

(2) Provide more than $400 million in resources to US Immigration and Customs Enforcement (ICE), and Customs and Border Protection (CBP).

(3) Allocate $22 million of "accelerated judicial proceedings" for these immigrants.

(4) Devote nearly $200 million for providing housing, food, and medical care to the detained minors as they await processing.

(5) Change the aforementioned law "to require that all unaccompanied minors are treated the same as Mexicans for the purpose of removals. This would require unaccompanied children who do not wish to be voluntarily returned to their home country to remain in HHS custody while they await an expedited immigration court hearing(s)."


How has Senate Majority Leader Harry Reid responded to this development?


Which sparked this bullseye observation from Lachlan Markay:


For those who wonder why Congress doesn't act on the few things it *can* agree on, wonder no more https://t.co/Pr10CoMr3j


Reid is actively trying to undermine the House leadership's bill by needlessly linking it to a highly divisive issue. David Drucker explains:

House Republicans say Senate Majority Leader Harry Reid is playing head games to undermine their attempt to pass a $659 million border package. As Speaker John Boehner tries to build support among the Republican caucus for legislation to address the thousands of unaccompanied minors coming to the U.S. from Central America, his Democratic counterpart in the Senate has brought up the toxic issue of immigration reform. On Tuesday, Reid threatened to attach comprehensive immigration reform legislation to any border bill that makes it through the House — a move that would infuriate immigration hawks and split the GOP caucus....It's unlikely that Reid has the votes to actually do that. The four Republican members of the “gang of eight” sent a letter on Friday vowing not to support any border bill that includes their comprehensive immigration bill. Senate Republicans are highly unlikely to provide Reid the votes to do this in any event, given their broad opposition to the Democrats' border proposal.


Democrats' proposed alternative "is more focused on humanitarian relief," than Republicans' plan to "beef up border security and facilitate repatriation" efforts, according to Drucker. It also (of course) spends much, much more than the Republicans' version. Rather than working to forge a reasonable and limited compromise, Reid is messing around with hyper-partisan games in order to derail a viable idea...with the clock ticking down to the August recess. House Speaker John Boehner angrily rejected Reid's meddling suggestion yesterday evening:

Senator Reid, embarrassed that he cannot strong-arm the Senate into passing the blank check President Obama demanded, is making a deceitful and cynical attempt to derail the House’s common-sense solution. So let me be as clear as I can be with Senator Reid: the House of Representatives will not take up the Senate immigration reform bill or accept it back from the Senate in any fashion. Nor will we accept any attempt to add any other comprehensive immigration reform bill or anything like it, including the DREAM Act, to the House’s targeted legislation, which is meant to fix the actual problems causing the border crisis. Such measures have no place in the effort to solve this crisis, and any attempt to exploit this crisis by adding such measures will run into a brick wall in the People’s House.


Allahpundit calls Reid's maneuver the latest "reminder that Democrats will never agree to improve security for the sake of improving security, even during a sustained surge of illegals across the border." The root causes of that sustained surge, incidentally, are twofold: Some of these kids truly are fleeing terrible violence, cartels, gangs, and sex trafficking. Others made a beeline for the US based on rampant (and erroneous) rumors about an impending blanket amnesty for minors. Those whispers weren't totally baseless; they were spurred by President Obama's 2012 DACA (or DREAM Act-style) executive order. In spite of this ongoing crisis, which has been explicitly linked to that DACA-caused magnet, President Obama is reportedly preparing to pull the trigger on a "large-scale move" to extend a similar temporary amnesty to millions of illegal immigrant adults. This would be a breathtakingly reckless and deliberately incendiary decision. As a self-professed moderate on the immigration issue, I fully endorse this sentiment:

Dems can't play games with border security and then wonder why conservatives don't trust them to negotiate immigration reform in good faith.


The same can be said of the administration's incompetent and unlawful implementation of Obamacare. They cannot be trusted to do big things well, or to enforce the law fairly. I'll leave you with a segment on Fox News from last week in which I lamented DC's inability to do much of anything, even on this pressing concern. And this aired days before Harry Reid pulled the latest toxic rabbit out of his hat: