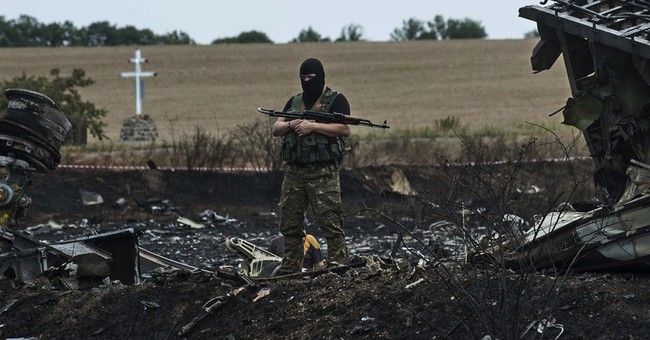 Officials at the US Embassy in Kiev took the extraordinary step of releasing to the public a great deal of intelligence on the downed airliner attack this weekend, which clearly points the finger at Moscow. The case against Russia was built in a strikingly candid and prosecutorial blog post on the embassy's official website. Damning:


We assess that Flight MH17 was likely downed by a SA-11 surface-to-air missile from separatist-controlled territory in eastern Ukraine. We base this judgment on several factors. Over the past month, we have detected an increasing amount of heavy weaponry to separatist fighters crossing the border from Russia into Ukraine. Last weekend, Russia sent a convoy of military equipment with up to 150 vehicles including tanks, armored personnel carriers, artillery, and multiple rocket launchers to the separatist[s]. We also have information indicating that Russia is providing training to separatist fighters at a facility in southwest Russia, and this effort included training on air defense systems. Pro-Russian separatist fighters have demonstrated proficiency with surface-to-air missile systems and have downed more than a dozen aircraft over the past few months, including two large transport aircraft. At the time that flight MH17 dropped out of contact, we detected a surface-to-air missile (SAM) launch from a separatist-controlled area in southeastern Ukraine. We believe this missile was an SA-11. Intercepts of separatist communications posted on YouTube by the Ukrainian government indicate the separatists were in possession of a SA-11 system as early as Monday July 14th. In the intercepts, the separatists made repeated references to having and repositioning Buk (SA-11) systems...

Shortly after the crash, separatists – including the self-proclaimed “Defense Minister” of the Donetsk People’s Republic Igor Strelkov – claimed responsibility for shooting down a military transport plane on social media. In an intercepted conversation that has been widely posted on the internet, a known-separatist leader tells another person that a separatist faction downed the aircraft. After it became evident that the plane was a civilian airliner, separatists deleted social media posts boasting about shooting down a plane and possessing a Buk (SA-11) SAM system. Audio data provided to the press by the Ukrainian security service was evaluated by Intelligence Community analysts who confirmed these were authentic conversations between known separatist leaders, based on comparing the Ukraine-released internet audio to recordings of known separatists.


CNN's Pentagon correspondent, Barbara Starr, is struck by how unusual the move was:


The post also noted that the SA-11 missile system was seen being spirited back into Russia on Saturday -- and that it was missing a single missile from its arsenal, "suggesting it had conducted a launch." A Business Insider piece lays out much of the same information, including photographic evidence (which Russia denies), screenshots from since-deleted social media posts, and partial transcripts of several incriminating separatist phone conversations, intercepted by Ukrainian intelligence and authenticated by the United States. One such discussion demonstrates how keen the Kremlin was to get ahold of the jetliner's "black box:"

When a rebel, Oleksiy, says he doesn’t know who has them, the leader responds: “Do it really quick. Urgently. Moscow asks where the boxes are." The rebel at the site says monitors from the Organization for Security and Co-operation in Europe are there. The leader tells him they are interested in the black boxes. “They must be under our control,” he says. In the second tape, the rebel leader again alludes to outside influences: "Our friends from high above are very much interested in the fate of the 'black boxes.' I mean people from Moscow."


The Moscow-backed rebels restricted access to the crash site for days, scrubbing the scene of evidence, and treating human remains with appalling disrespect. While many European leaders were reluctant to participate in heavy sanctions against Russian interests following Moscow's invasion-by-thinly-veiled-proxy of sovereign Ukrainian territory earlier this year, the MH17 bloodbath appears to have stirred strong passions on the continent. The Washington Post reports that world opinion is shifting swiftly and decisively against Russia:

In the global court of public opinion, the verdict appears to be rendered. Vladimir Putin is guilty. The Russian president could once claim a semblance of a role as a global statesman. But with the downing of a commercial airliner by what U.S. and Ukrainian officials suggest was a Russian missile, supplied to pro-Moscow rebels, Putin was facing a personal barrage of worldwide condemnation that threatened to result in further sanctions on Russia if it did not rapidly change course in Ukraine. Australia has raised the prospect of banning Putin from a meeting of the Group of 20, the world’s most powerful nations, in November if he did not exert more pressure on the rebels who left corpses strewn on the ground for days, contaminated the crash site and hampered an international investigation. Britain, meanwhile, openly accused the Russian leader of sponsoring “terrorism.” ... Particularly in Europe — a continent long leery of going too far to pressure Moscow over its support of separatists in Ukraine — initial shock was quickly gathering into outrage and action. On Sunday, German Chancellor Angela Merkel, French President François Hollande and British Prime Minister David Cameron held a joint phone call on Russia. A Downing Street spokesman said the three leaders agreed that the European Union “must reconsider its approach to Russia and that foreign ministers should be ready to impose further sanctions on Russia when they meet on Tuesday.” ... It suggested a possible turning point in the way Europe — the region with the most economic leverage over Russia — has tactically managed Putin to date...The change was spurred by horrific scenes of dead bodies left uncollected at the crash site, and, later, by the unceremonious loading of corpses onto trains.


With the UK explicitly calling for stepped up sanctions -- much to the chagrin of Russian oligarchs -- the separatists/terrorists have finally relented, granting international observers "nearly unfettered" access to the crash site. But those monitors are still struggling to gain access to the black box, and pro-Russia militias have detained reporters seeking to gather facts about the status of the dead. So what's next? Though President Obama's statement this morning did virtually nothing in the way of answering the critical "or else what?" question, Canada has announced a fresh round of sanctions against Russia, and the EU appears to be mobilizing:

BREAKING: EU ambassadors have been summoned to an emergency meeting on Ukraine tonight.


I'll leave you with video of Obama's toughest talk yet in laying the MH17 attack at Moscow's feet. But he doesn't even hint at consequences -- leading a number of media analysts to publicly wonder what the point of the statement was: