War on Women: Obama WH Makes No Progress Closing Own 'Pay Gap' Since 2009 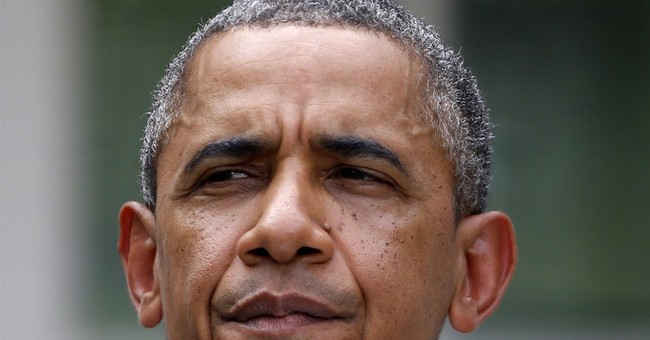 The White House and its allies are hoping that just enough moronic demagoguery over the Supreme Court's Hobby Lobby decision will suffice to entice the Democratic base into turning out in the fall and mitigating Republican gains. Democrats have pounded the "war on women" theme -- which served them well in 2012 -- excoriating the GOP for sins against womanhood, both real (refusing to play along with the "paycheck fairness" stunt) and imagined ("limiting access" to birth control). We've noted in the past the administration's howling hypocrisy on the issue, elucidating the many reasons why Obama's pay gap stats are bogus. This crew knows their talking points are misleading and unfair, but they keep using them anyway. Most problematic for the White House is the fact that by President Obama's inane measuring stick, the country's most powerful abettor of pay gap discrimination is…President Obama. The Washington Post looks at updated figures and confirms that the Obama White House continues to pay female employees substantially less than their male colleagues. Drink in the rank misogyny:


Five years, no progress. Now, do I actually believe this disparity is fueled by anti-women bigotry? I do not, in spite of criticisms from women who've left the administration complaining of a prevailing 'boys club' culture. Women tend to get paid less than men for a variety of reasons, several of which are detailed in the WSJ piece linked above. But so long as Obama Inc. keeps lambasting Republicans for "standing in the way of paycheck fairness," or whatever, and citing debunked, nuance-free numbers, they ought to be held to their own idiotic standard. The White House cannot defend itself in shades of gray on this issue when they're utterly unwilling to extend that same benefit of the doubt to anyone else. Honesty would deprive them of the opportunity to score cheap political points among the gullible, slow-witted voters upon whom they rely. Regardless, in spite of their relentless efforts, the administration has been unable to convince most women that President Obama is doing a good job. Dan wrote up the big headline from today's Q-poll, which shows that Americans rank Barack Obama as the worst president since the Second World War, with a shot of 2012 buyers' remorse mixed in. Other findings in the crosstabs are just as ugly for Team O. Driving his paltry 40 percent overall approval rating is an electorate that is profoundly unimpressed with his performance on the big issues:


He's deep underwater on all three questions among female voters. Obamacare support remains upside-down by double-digits, too. Hell, a new Monmouth University poll shows the healthcare law down by 14 points (40/54)…in New Jersey. Barack Obama has spent his entire presidency blaming everyone but himself for his poor leadership and failed policies. One of his recurring targets has been his predecessor, whose unpopularity in 2007 and 2008 helped propel Obama into the Oval Office. As he continues his flippant and petulant blamestorming -- evidently unchastened by his 9-0 smack-down by SCOTUS this week -- l'll leave you with this data point from the Quinnipiac poll, featuring The One and the man he's been complaining about for five years: