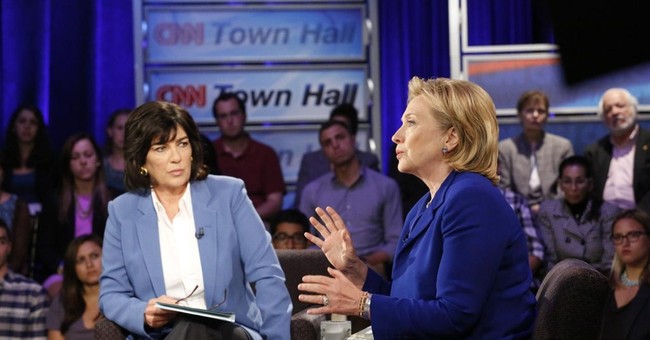 You-know-who took her book tour to cable news yesterday, enjoying an hourlong town hall-style infomercial on CNN (the special was literally named after her book -- how's that for publicity?), and a half-hour interview with Fox News' Bret Baier and Greta Van Susteren. During the Christiane Amanpour-led forum, Mrs. Clinton raised eyebrows with an assertion about the gun control debate. SE Cupp correctly highlights the worst part of that sound byte:


Hillary also made some news by affirming that unanswered questions remain about Benghazi, a point we've been making for some time:


“There are answers, not all of them, not enough, frankly,” she said of the September 2012 attacks on a diplomatic and CIA compound that killed Ambassador J. Christopher Stevens and three others. “I’m still looking for answers, because it was a confusing and difficult time,” Clinton said.


CNN's Dana Bash called Clinton's comments "music to Trey Gowdy's ears," referring to the Republican chairman of the Benghazi Select Committee. Democrats and liberals have argued that Benghazi has morphed into a "phony scandal," and that the issue is settled. A large majority of Americans support the creation of a special Congressional panel to investigate further, with six in ten respondents to a recent CNN poll describing the administration's response to the controversy as "dishonest." Later on, Clinton continued to duck responsibility questions on the issue, at one point arguing that the law prevented the State Department from holding anyone accountable for their failures leading up to the attacks, and continued to insist that maybe that internet video had something to do with the attack after all. The video was never implicated by US intelligence, which determined almost immediately that the deadly raid was the work of terrorists. The State Department itself had reached that conclusion by the next day, yet the White House and Clinton continued to play down the terrorism angle, and play up the video story, for weeks. Previously-withheld White House emails have shown that references to the online clip were inserted into White House talking points prepared for Amb. Susan Rice for her appearance on the Sunday talk shows, several days after the attack. Hillary dismisses these contradictions as innocent "fog of war" confusion. Further into the Fox interview, Hillary conceded that the IRS scandal is a legitimate issue that requires further investigation, but also tried to defend the administration's "phony" characterization:

"There really wasn't a lot of, uh, you know, evidence that [the targeting] was deliberate."


Except, of course, for the statistics, the exposed lies, and the fact that the IRS admitted to and apologized for its improper targeting of conservative groups. Van Susteren also rightly points out that the "missing emails" excuse is highly suspicious and contributes to many Americans' mistrust of the administration's actions. National Journal's Ron Fouriner explains how Clinton's answer was a slippery word soup designed at deflection and pandering:


"I think that anytime that the IRS is involved, for many people, it's a real scandal." This was the first thing Clinton said after Greta Van Susteren asked whether she thought it was a phony scandal. The line was rehearsed. It's the basis of the BuzzFeed tweet. The key to the sentence is "for many people." Clinton did not say whether she's one of those people. With a soft chuckle, she delivered a line that simultaneously empathized with Obama's critics while giving herself a safe distance from them. I never said I think the scandal is real. It was vintage Clinton. You could almost see her husband standing in the studio's shadows, biting his lower lip and nodding. "And I think, though, there are some challenges that rightly need to be made to what is being said, and I assume the inquiry will continue." The first part of the sentence is mush, but I took it to be a signal to the White House and its liberal allies that GOP allegations must be challenged. The second half is a sop to people who want the investigation to continue. Note that Clinton did not say who should conduct the inquiry, nor did she demand transparency from the White House and the IRS. Again, she played both sides of the fence.


Her parsing and cautious non-answers should disabuse anyone laboring under the misapprehension that Hillary Clinton does not fully intend to run for president -- at this stage in the game, at least.