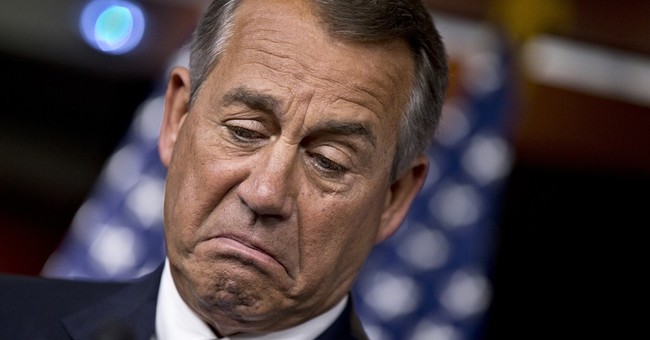 This strikes me as an unforced error by the Speaker of the House:

"The appetite amongst my colleagues for doing this is not real good...here's the attitude: 'Ohhhhh, don't make me do this! Ohhhhhh, this is too hard!' You should hear them. You know, we get elected to make choices."


In the clip, Boehner acknowledges the camera in the back of the room, so he knew full well that his comments would become public. What was he thinking? I recognize that Boehner is a supporter of immigration reform. He's said so on the record, he's said so to major donors (most of whom are on board, too), and there are rumors percolating that House leadership may try to take up the issue once primary season is over. That would be political malpractice. Setting aside the merits of reform -- and I'm generally a supporter, though ultimately not of last year's flawed Senate bill -- the timing of this brewing fight is exceptionally terrible. Americans are dissatisfied with the Obama economic "recovery," which is so weak that Democratic pollsters are urging their side not to mention it. Republicans stand to enjoy an advantage on that top issue. Obamacare, a source of binding GOP unity, also remains quite unpopular, providing another major opening for the opposition to win in November. By contrast, immigration reform is nowhere near the top of Americans' priority list. Why on God's green earth would the Republican leadership foist an acrimonious, base-enraging immigration battle upon the party this year? Doing so after primary season would be even more outrageous, as the base would understandably feel betrayed and played. Subtle reminder: The conservative base's passion is a core component of the GOP's victory strategy in 2014. Also, if you're "hellbent" on passing a reform package, why not wait until 2015? Best case scenario, you've won back the Senate, so Republicans would be in the driver's seat in terms of crafting and passing legislation. They could send something to the president's desk that looks a lot different than what Democrats would prefer, and essentially dare him to veto it. Worst case scenario, the midterms don't go as well as hoped for the GOP, and a lot of nervous rank-and-file Republicans may be willing to take a stab at an effort that could (theoretically at least) help the party's demographics problem with Hispanic voters. Making the big push over the next few months borders on suicidal.

Then there's the issue of Boehner gratuitously antagonizing his own caucus. He's been known to lash out at certain conservative factions before, but this go 'round is uniquely baffling. Yes, there's an element of political cravenness among some opponents of reform. But "it's too hard" isn't the crux of most skeptics' concerns. Many Republicans are rightly suspicious of "comprehensive" federal solutions to complex (see: Obamacare), while others are mistrustful of this administration to duly enforce any provisions of an immigration law that they oppose politically. Such are the wages of the lawless subversion of our process; you forfeit goodwill and trust. The president has rewritten his own signature law on the fly, issuing waivers and delays galore, with nary a legal justification in sight. Why would anyone believe that he and Eric Holder would faithfully adhere to inconvenient bits of an immigration law over which Democrats didn't exert 100 percent legislative control? Don't forget, Obama imposed a de facto DREAM Act (the idea behind which I by and large support) by executive fiat in the thick of an election year. He made that decision after having explicitly stated that he lacked the authority to do so. In short, there are legitimate reasons to oppose the timing and potential contents of a comprehensive reform agenda that extend far beyond rank political cowardice. Boehner did himself no favors by implying otherwise, even if it his remarks were just intended to get a laugh. If he wants to claim the mantle of being the "adult in the room," so to speak, he should try acting like one. I'll leave you with our debate on this controversy from earlier this afternoon (in which I fleetingly derailed the segment to wish Julie Roginsky a happy birthday -- hence the cupcake):