Devastating: 90 Percent of Uninsured Haven't Signed Up For Obamacare, Most Cite High Costs

Thursday was a very bad day -- perhaps even the worst possible day, in fact -- for President Obama to say the following about his signature healthcare overhaul: "At this point I think, actually, it is working the way it should." Here he is advancing that assessment, in living color:

Obama's statement would sound wildly out-of-touch based solely on the recent announcement of his administration's 30th (!) politically-motivated Obamacare delay -- the repercussions of which expert Bob Laszewski discusses here. Adding insult to injury many of these on-the-fly changes have occurred after White House officials pledged the delay parade was over. But it gets worse. A lot worse. The Washington Post has published an absolutely devastating report about the administration's progress, or lack thereof, in signing up previously uninsured Americans under Obamacare. Which, you may recall, was the primary stated purpose of this $2 trillion law. This is what abject failure looks like:

The new health insurance marketplaces appear to be making little headway so far in signing up Americans who lack health insurance, the Affordable Care Act’s central goal. A pair of surveys released on Thursday suggest that just one in 10 uninsured people who qualify for private health plans through the new marketplace have signed up for one — and that about half of uninsured adults has looked for information on the online exchanges or plans to look. Taken together, the snapshots shown by the surveys provide preliminary answers to what has been one of the biggest mysteries since HealthCare.gov and separate state marketplaces opened last fall: Are they attracting their prime audience? One of the surveys, by the consulting firm McKinsey & Co., shows that, of people who had signed up for coverage through the marketplaces by last month, just one-fourth described themselves as having been without insurance for most of the past year...The McKinsey survey also found, as it had during the previous few months, that, of people who are uninsured and do not intend to get a health plan through the marketplaces, the biggest factor is that they believe they could not afford one.


It's difficult to overstate the scope of this failure. Fully 90 percent of uninsured Americans who are eligible for plans under Obamacare have declined to sign up for one. About half of those people simply haven't bothered looking. Four out of every five who have browsed their options elected to take a pass. And if you're waiting for a statistical rebuttal from the White House, don't hold your breath:

CMS' Cohen, asked how many uninsured signing up for ACA: “That's not a data point we are really collecting in any sort of systematic way”


Among uninsured Americans who've said 'no thanks' to Obamacare, the number one factor (by far) cited is lack of affordability, even after all of the taxpayer subsidies are calculated:

CHART: McKinsey survey shows 50% who shopped exchanges and did not purchase cited affordability as the reason. pic.twitter.com/SqJMvqciL3


According to a review by eHealthInsurance.com, average unsubsidized individual premiums have increased 39 percent for individuals and 56 percent for families compared to pre-Obamacare levels. The former finding aligns closely with the Manhattan Institute's research. So the overwhelming majority of "new" Obamacare enrollees are people who already had coverage before the law was passed. Millions of those people were uprooted from their preferred coverage (a major broken promise) and forced into new plans, for which many are paying more. Disaster. And again, it gets worse: Of those few previously-uninsured Americans who have "selected plans" under Obamacare (thus fitting the administration's loose definition of "enrolled"), nearly half haven't paid their premiums. Those people are not covered:

CHART: McKinsey survey shows 47% of previously uninsured who selected a plan have not paid a premium. pic.twitter.com/hGZYwJQRqE


And as a final indignity, Gallup is out with new polling on Obamacare. Fox News' national survey released last night showed Obama's approval rating on healthcare underwater by 23 points, with 57 percent of Americans saying that his administration has failed to improve America's healthcare system. Gallup asks different questions, but the results are just as ugly. Approval of Obamacare remains terrible (40/55) with more than twice as many Americans saying the law has hurt their family's situation (23 percent) than helped it (10 percent). And this speaks for itself: 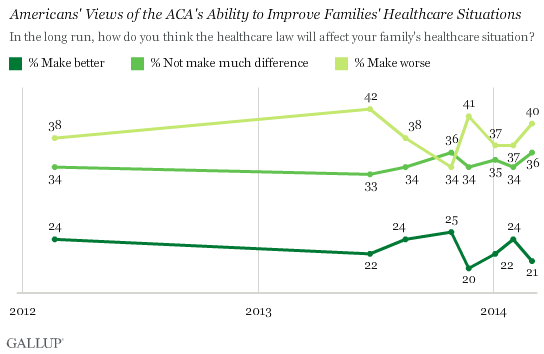 Obamacare is failing to insure the uninsured, driving Americans' healthcare costs up, and hurting twice as many people as it's helping. How many voters would agree with the president's assessment that this law is "working the way it should"?