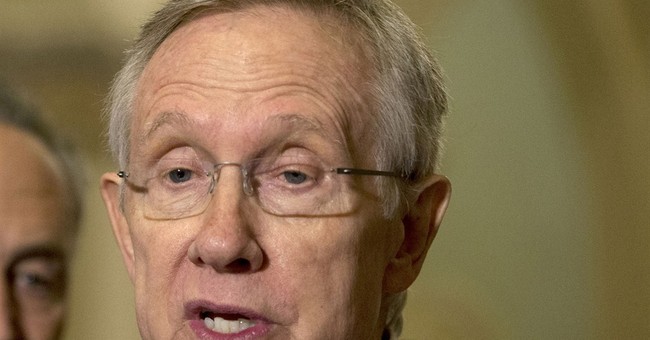 The truth, from a man best known for his shameless lying:

In just about seven weeks, people will be able to start buying Obamacare-approved insurance plans through the new health care exchanges.  But already, Senate Majority Leader Harry Reid is predicting those plans, and the whole system of distributing them, will eventually be moot.  Reid said he thinks the country has to “work our way past” insurance-based health care during a Friday night appearance on Vegas PBS’ program, Nevada Week in Review. “What we’ve done with Obamacare is have a step in the right direction, but we’re far from having something that’s going to work forever,” Reid said. When then asked by panelist Steve Sebelius whether he meant ultimately the country would have to have a health care system that abandoned insurance as the means of accessing it, Reid said: “Yes, yes. Absolutely, yes.”  The idea of introducing a single-payer national health care system to the United States, or even just a public option, sent lawmakers into a tizzy back in 2009, when Reid was negotiating the health care bill.


There's no need to fret about Obamacare's myriad implementation meltdowns and broken promises, Reid explains; after all, everyone knows the new law isn't "going to work forever."  Now they tell us.  The Left evidently plans to bide its time, allow their own interim law to wither on the vine, then swoop in with an ingenious "new" plan: Even more government control.  Sure, many Americans may suffer in the meantime, but true compassion is measured by the advancement of Statist policies, so Obamacare-caused pain can be chalked up as collateral damage for the cause.  It is astonishing to watch Reid breezily admit that Obamacare is unsustainable as its full implementation looms, especially since the Senate Majority Leader might have likened you to a supporter of slavery for making such a claim while Obamacare was being debated.  Now that it's the law and the moment of truth is approaching, of course we'll have to move away from an insurance-based system one of these days.  Kudos to the Obamacare minions for keeping a straight face while reciting their "you can keep your existing plan" talking points, knowing full well that their end goal is to outlaw said existing plans.  Obamacare is a costly, inefficient, harmful means to an end.  And if you (understandably) don't want to take Reid's word for it, listen to the candid assessments of his leftist brethren:


As the debate over Obamacare played out, conservatives who merely pointed out that Barack Obama was once a vocal advocate for a government-owned-and-operated healthcare system were tarred as vicious smear merchants.  How dare we repeat Obama's own words?


Imagine if Paul Ryan had given a speech circa 2003, in which he confessed that he "happened to be a proponent of ending Medicare altogether."  Might that soundbyte have effectively ended his future fair-minded efforts to reform the broken program? And might the Left's hyperbolic attacks have been even more unhinged than this?  Those are rhetorical questions.  In any case, as average Americans try to survive the Obamacare era, they can rest assured that their rulers will soon return with an improved plan to fashion the nation's healthcare system to more closely reflect Great Britain's panacea -- at which point, the Left's sliming of conservatives over single-payer worries will instantly morph from "that's not our goal, you paranoid wingnuts!" to "why do you want these children to die?"  By the way, Reid's been on a roll recently.  He's engaged in ugly concern trolling about the root cause of GOP opposition to Obama's agenda, "hoping" that it's not based on the president's skin color (this from Mr. "Negro Dialect"), and compared the Tea Party to pre-World War One anarchists (this from a leader of the Occupy-aligned political party).  And since casual defamation seems to be in vogue, has anyone conclusively disproven persistent rumors about Reid's personal proclivities?  The "word's out," Harry.