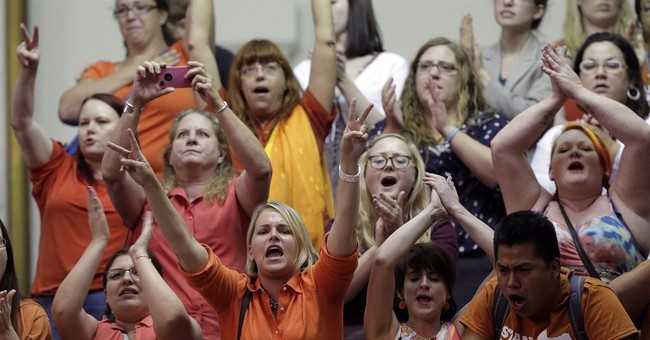 A petite Fort Worth Democrat in pink sneakers staged a 10-hour-plus filibuster marathon in which she never sat down. Abortion rights activists succeeded in disrupting Republican senators, and the fate of a bill that Gov. Rick Perry had made a priority devolved into a legislative mess so thick that even senators who had voted on the bill could not say for certain whether they had indeed voted on the bill. The state Senate’s vote came right at a midnight Tuesday deadline, amid widespread confusion the noise of a chanting crowd of the bill’s opponents in an upstairs gallery. Senate Democrats said the vote took place past the deadline at 12:02 a.m. or 12:03 a.m., while Republicans disputed those claims, saying the vote was legitimate.

But at 3 a.m., Lt. Gov. David Dewhurst, the presiding officer of the Senate and a Republican supporter of the bill, told lawmakers and reporters that although the bill passed on a 19-to-10 vote, the bill could not be signed in the presence of the Senate and was therefore dead, blaming “an unruly mob using Occupy Wall Street tactics” as the primary cause. “With all the ruckus and noise going on,” Mr. Dewhurst said, he could not complete administrative duties to make the vote official and sign the bill. Senate Democrats and women’s right’s advocates said the real reason the vote could not be made official was a time stamp on official documents that showed the bill passed after midnight. The Legislature’s official Web site first posted that the Senate’s vote occurred on Wednesday, after the midnight deadline, but the date was later changed to Tuesday for unknown reasons.

Watch the video for flashbacks to Madison, Wisconsin. (How'd that turn out?)  Funny how the Left's boorish behavior is celebrated as "democracy in action" by many in the media, while tales of Tea Party violence are fabricated.  Just so we're clear, this engraged crowd was chanting in defense of abortions performed beyond 20 weeks of gestation -- the beginning of the sixth month.  Unborn children feel pain in the womb at this stage, and many cross the threshold of viability.  The bill included an exception for when a mother's life is at risk, but that didn't stop State Senator Wendy Davis from speaking for ten hours to block a vote to ban these gruesome procedures.  She's now a folk hero on the Left.  Her ghoulish filibuster was eventually cut off, but not before noisy disruptions in the chamber prevented the law from being passed and certified before the session expired.  Gov. Rick Perry is considering calling a special session to finish the job, and Texas Republicans are vowing to protect these viable, pain-capable fetuses.  Here's what the bill would do, via Mollie Hemingway:

[It] would protect unborn children who had made it to 20 weeks’ gestation, would require abortion clinics to meet the standards of other ambulatory surgery centers and would require doctors to have admitting privileges at nearby hospitals.

Needless to say, opponents of the law framed their position in vague, euphemistic terms like "protecting women's health."  Ironically, the State Senator who stepped in to curtail Davis' abortion talk-fest was a pro-life female physician, Dr. Donna Campbell.  Campbell represents a majority of Americans on this issue; Davis represents a hardcore fringe.  National Journal released a poll today demonstrating that Americans support a 20-plus-week abortion ban, a version of which passed the House of Representatives last week.  Interestingly, women are more likely (50/44) to back these abortion restrictions than men (46/45).  Who are these women?  They're ladies who evidently don't believe that sixth-month abortions are synonymous with "protecting women's health."  Another nugget: Young voters support the ban more widely than many older Americans.  Respondents aged 18-29 say they back the law by a 13-point margin, roughly the same level of support registered among political independents.  Gallup measured abortion views in a national survey last month.  The results were encouraging for pro-lifers, and unambiguous on late-term abortions.  Sixty-four percent of Americans told Gallup that they believe second term abortions (months 4-6) should be illegal.  That number rose to 80 percent in the third trimester.  The reason that National Journal's polling may have been tighter is the distinction between weeks and months.  Everyone intuitively understands what a sixth-month abortion is.  "Twenty weeks" is a less impactful descriptor.  The ideologues who swarmed the state Capitol in Texas last night were loud and pretty effective, at least for the moment.  But they represent a small percentage of America, and an even smaller percentage of Texans.  I'll leave you with these notes of encouragement for the defenders of late-term abortion.  Sick:

Something special is happening in Austin tonight: http://t.co/RpbnCbO6zw#StandWithWendy

Wendy Davis engaged in the kind of filibuster I can support. #standwithwendy#SB5


UPDATE - Hemingway also reminds us that a Texas abortionist is being accused of horrific acts that are somehow arguably worse than those of convicted murderer and abortionist Kermit Gosnell.
UPDATE II - Gov. Perry is convening a special session to get this done.
RNC Chair Says Trump 'Is Not Done Fighting' and Outlines Next Steps
Cortney O'Brien
Gov. Larry Hogan Makes Absurd Comparison for People Not Wearing a Mask
Julio Rosas
President Trump Celebrates the Stock Market Hitting a New Record
Katie Pavlich
Trump Has a Message For Those Who Think GSA Decision Means He's Conceding
Leah Barkoukis
After Being Called Out, Cuomo Cancels His Thanksgiving Plans
Cortney O'Brien
'Come on Down': Senator Perdue Challenges AOC to Campaign for Jon Ossoff in Georgia Runoff
Reagan McCarthy
CARTOONS | Michael Ramirez
View Cartoon
Most Popular