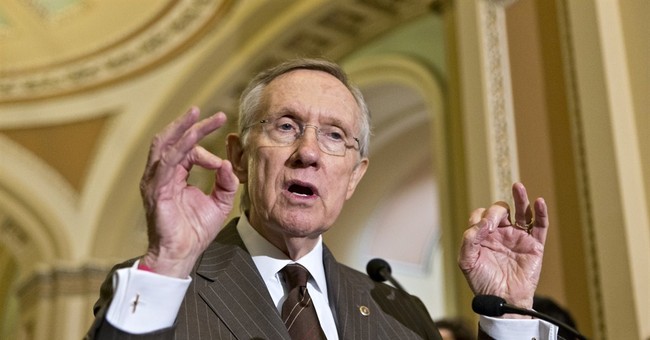 UPDATE: As expected, the Senate has invoked cloture on the Hoeven/Corker substitute amendment, paving the way for final passage later this week.  The yeas and nays were 67-27.  Expect to hear a lot of heated rhetoric like this directed at the House in the coming days. That pressure may die down a bit over the next few weeks due to various recesses and other looming legislative fights.  For a list of Republicans who voted for cloture, see these tweets.  [The full roll call is HERE.  Fifteen Republicans joined lock-step Democrats in voting for cloture].

The stage is set for a 5:30 pm ET cloture vote on the revised 'Gang of Eight' immigration overhaul.  The vote totals remain unsettled at this hour (Sen. John Cornyn, whose border amendment was defeated last week, has come out as a 'no') but the final tally of 'ayes' will be "in the neighborhood" of 70 votes.  So it's all over except for the shouting in the Senate.  With the vote approaching, both sides are jostling for position. Sen. Bob Corker's (R-TN) office released a "myth vs. fact" sheet about the amendment he's co-authored, which highlights some elements of the proposal that appeal to conservatives.  Meanwhile, additional unattractive features of the bill are seeping into the right-leaning media:


(1) The legislation confers wide discretionary powers on the Secretary of Homeland Security; this entails a largely-unchecked ability to grant anti-deportation waivers based on a vague "public interest" standard (via Cornell law professor William Jacobson): (2) According to National Review's Andrew Stiles, the 1,200 page bill offers special sweeteners for specific states and Senators, including an unexplained Alaska carve out:

The revised bill includes an amendment from Senator Susan Collins (R., Maine) that eliminates a requirement that at least 90 percent of funding for a new program to increase law-enforcement preparedness along U.S. borders be devoted to the southwest border region. Without the requirement, northern states will be eligible to receive more of those funds. Senator Jon Tester (D., Mont.) cosponsored the amendment.

Senators Lisa Murkowski (R.) and Mark Begich (D.) won a special carve-out for Alaska’s seafood-processing industry, which is referenced specifically in the amended legislation. For reasons that are not explained, the bill now stipulates that certain low-skilled jobs — specifically, ”seafood processing positions in Alaska” — are to be classified as ”shortage occupations,” which will make it easier for the industry to bring in cheap labor in the form of low-skilled and temporary workers. Alaska is the only state to receive special treatment along these lines.

The former item suggests that common-sense limitations on how and where the $46 billion in "border surge" funds must be allocated are being loosened.  Maine and Montana want pieces of that juicy enforcement pie, and they'll apparently get them -- even though the obvious bulk of the problem lies along the southern border.
(3) At the behest of self-described socialist Sen. Bernie Sanders, a feature of President Obama's rejected so-called jobs plan (the "second stimulus") has been inserted into the legislative language:

The original Gang bill ended with a section designated Title IV, which was headlined REFORMS TO NON-IMMIGRANT VISA PROGRAMS. The Hoeven-Corker version of the bill added a Title V, with the headline JOBS FOR YOUTH. The measure would provide $1.5 billion in the next two years to provide jobs for Americans between the ages of 16 and 24. It was originally pushed by Democratic Sen. Bernard Sanders, who wanted to come to the aid of young workers who were “hard hit by the Wall Street-caused recession.” Now, Sanders says immigration reform will further damage youth job prospects. According to Sanders, each state would receive a minimum of $7.5 million to run a summer jobs program for young people in 2014 and 2015. States with high youth unemployment would receive a lot more. Many of the bill’s provisions are based on President Obama’s American Jobs Act, which Congress never passed. Sanders claims it would be paid for by “imposing a temporary $10 fee on employers who hire guest workers and international workers who receive green cards.”


Byron York spells out the irony: "On the one hand, a critic could ask what business lawmakers have recycling provisions from the American Jobs Act as new additions to a sweeping new immigration reform bill. On the other hand, one could argue that the Sanders addition is an attempt to counter some of the economic damage the bill’s sponsors will not admit it will inflict."   Supporters of the Senate bill insist that it will improve the US economy and brighten the job picture.  Some respected conservative economists agree.  So why are backers of the proposal allowing the inclusion of this item, which seeks to preemptively ameliorate a problem that they claim won't be an outcome of the law?  Aside from rank vote-buying, that is.  Finally, there's this:


The CBO determined that the (pre-Hoeven/Corker) ‘Gang of Eight’ bill would (a) reduce the flow of illegal immigrants by a mere 25 percent — allowing nearly 5 million new illegals to enter the US over the next decade — and (b) would only afford provisional legal status to roughly 8 million of the 11.5 million undocumented immigrants who are currently here.  When you add up those disqualified millions and the millions more expected to arrive within the next ten years, you get…8.5 million people.  That figure is larger than the group that stands to gain provisional legal status under the Senate legislation.  How would Ryan and Gutierrez propose dealing with that new, sizable underclass? ... The CBO score referenced above doesn’t take into account the Hoeven/Corker amendment, which will significantly alter the price tag and enforcement efficacy of the legislation.  How will the new expenditures and provisions change the CBO’s assessment of the bill?  Hill sources tell me they don’t know, nor will they before today’s cloture vote

In other words, we'll have lots of new questions without forthcoming answers still flapping in the wind as Senators line up to cast their most important votes on this legislation in two hours or so.  I must say that some of the analogies drawn between this bill and Obamacare are overstated.  For one thing, the 'Gang of Eight' plan isn't nearly as unpopular as the "Affordable" Care Act was (and still is), nor does it approach the same level of expense.  But there are some eerie similarities: Hurried votes, unread legislation, cynical buy-offs, new discretionary powers for cabinet secretaries, unseemly waivers, and wasteful spending.  In 2009, the Democrat-held House narrowly passed the Senate's atrocious healthcare bill.  Today, Republicans control that chamber.  Will they kill this bill, or at least offer a better alternative?  I'll leave you with Arizona Governor Jan Brewer endorsing the Senate bill because...

UPDATE - The CBO has released a flash score just as the votes are slated to begin.  They find that Hoeven/Corker would add $40 billion to deficits, compared to the original bill (which they say will reduce deficits by hundreds of billions).  They've also determined that the resulting border and interior enforcement would "significantly" reduce the inflow of new illegal immigrants, though they didn't have the time to assign any numerical values along these lines.  CBO previously determined that the original 'gang' legislation would have reduced incoming illegal immigration by 25 percent over its first ten years.
Clown Show: Senate Democrats Plan to Boycott Amy Coney Barrett Committee Vote
Matt Vespa
Biden Associate: Yeah, I Gave Hunter Biden a $1 Million+ Job As a Favor to His Father
Matt Vespa
Now That Obama is Stumping for Joe Again, the Trump Campaign Has Some Questions
Katie Pavlich
Sen. Schumer Blames Leader McConnell For COVID Relief Blocking After Democrats Filibuster GOP's Package
Reagan McCarthy
Jill Biden Leaves Out Major Fact About Child Separations at the Border
Katie Pavlich
New Ad Torches Biden for Supporting Notion That Children Can Choose Their Own Gender
Ellie Bufkin
CARTOONS | Al Goodwyn
View Cartoon
Most Popular