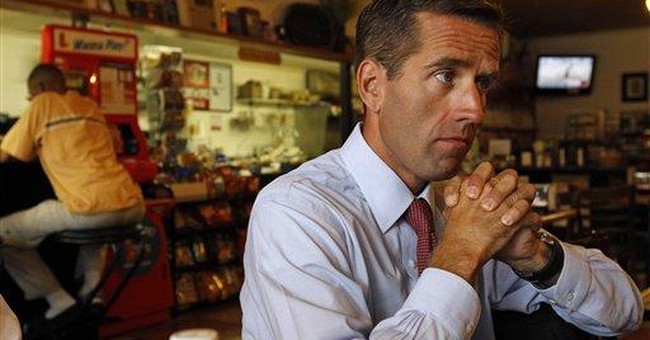 With heavy hearts, the Biden family—and their closest friends and loved ones—laid to rest Beau Biden, 46, on Saturday. He was Biden's eldest son, and the first child of an incumbent president (or vice president) to die while in office in roughly five decades. He was also an Iraq War veteran, former Attorney General of Delaware, and a rising star in the Democratic Party, rumored to be running for governor in 2016. He died on May 30th of brain cancer.

At the funeral Mass earlier today, President Obama delivered the eulogy, speaking about Beau’s moral character, his deep humility, and his devotion to his wife and children.

“‘A man,’ wrote an Irish poet, ‘is original when he speaks the truth that has always been known to all good men,’” the president began. “Beau Biden was an original. He was a good man, a man of character. A man who loved deeply, and was loved in return.”

“We are here to grieve with you, but more importantly, we are here because we love you,” he said to the family, and to mourners in attendance. “To suffer such faceless, seemingly random cruelty can harden the softest hearts or shrink the sturdiest. It can make one mean or bitter or full of self-pity. Or to paraphrase an old proverb: it can make you beg for a lighter burden. But if you’re strong enough, it can also make you ask God for broader shoulders. Shoulders broad enough to bear not only your own burdens, but the burdens of others.”

“To know Beau Biden is to know which choice he made in his life,” he declared. “To know Joe, and the rest of the Biden family, is to understand why Beau lived the life he did.”

While discussing the fact that Beau’s mother and sister were tragically killed in an automobile accident when he was child, the president explained how this traumatic event both shaped – and indeed changed – his life.

“Rather than use his childhood trauma as justification for a life of self-pity or self-centeredness, that very young boy made a very grown-up decision: He would live a life of meaning,” he said. “He would live a life for others. He would ask God for broader shoulders. Beau would guide and look out for his younger brother. He would embrace his new mom.”

“He would forever be the one to do the right thing,” he added.

In truth, Beau Biden was a moral person, just like his father, the president said.

However, while remarking on some of the similarities between father and son, Obama also noted that there were marked differences as well.

“As much as Beau reminded folds of Joe, he was very much his own man,” he intoned. “He was an original. He was [the son] of an incredible family who brushed away the possibility of privilege for the harder, better reward of earning his own way. He was a soldier who dodged glory, and exuded true humility. A prosecutor who defended the defenseless; the rare politician who collected more fans than foes; and the rare public figure who prioritized his private life above all else.”

“Beau didn’t cut corners,” he added. “He turned down an appointment to be Delaware’s attorney general so he could win it fair and square. When the field was clear for him to run for the senate, he chose to finish his job as AG instead. He didn’t do these things to gain favor with a cynical public, it’s just who he was.”

Finally, the president ended his remarks by noting that while his life was tragically cut short, Beau Biden accomplished much in his 46 years on earth.

“He did in 46 years what most of us couldn’t do in 146,” he averred. “He left nothing in the tank. He was a man who led a life where the means were as important as the ends. And the example he set made you want to be a better dad, or a better son, or a better brother or sister.”