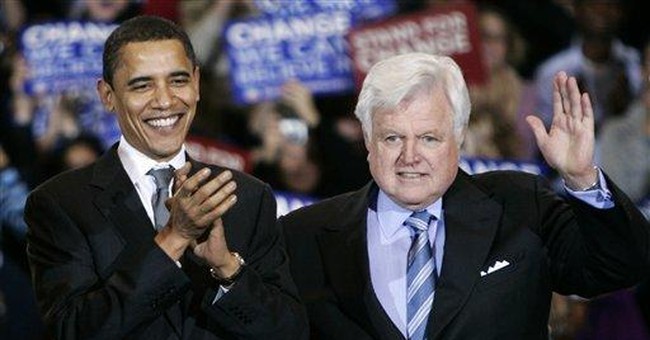 On Monday, President Obama traveled to Boston to speak at the dedication of the Edward M. Kennedy Center Institute for the U.S. Senate. Remarkably, the center’s ambitious design will give students -- and the general public alike -- greater understanding and an inside look at an indispensable American institution: the U.S. Senate.

“The centerpiece of the EMK Institute is a full-scale representation of the Senate Chamber,” according to its official website. “Visitors and students participate in experiences and programs giving them insight into, and appreciation, for the role of the Senate in our participatory democracy.”

It was apparently a concept that the late senator devised himself, brought to life by his surviving loved ones and friends six years after his death.

“We live in a time of such great cynicism about all our institutions,” President Obama said at the dedication after making the trip, emphasizing the importance of the new building. “And we are cynical about government and about Washington most of all. It’s hard for our children to see in our noisy, and all too often trivial pursuits of today’s politics the possibilities of our democracy, our capacity together to do great things.”

“This place can help change that,” he continued. “It can help light the fire of imagination, plant the seed of noble ambition in the minds of future generations.”

The president also reminded the audience that the institution's design was fitting, given Kennedy's compassion and willingness to champion bipartisan reforms.

“What if we worked to follow his example a little bit harder?" he intoned. “He understood that differences of party or philosophy could not become barriers to cooperation or respect. He could howl injustice on the Senate floor like a force of nature…but in his personal [dealings] he answered Edmund Randolph’s call to keep the Senate a place to restrain, if possible, the fury of democracy.”

“I did not know Ted as long as some of the other speakers here today,” he later added, more solemnly. “But he was my friend. I owe him a lot. And insofar as I can tell it was never ideology that compelled him. Except insofar as his ideology said ‘you should help people, you should have a life of purpose.’”

The Institute will be open to the public tomorrow.