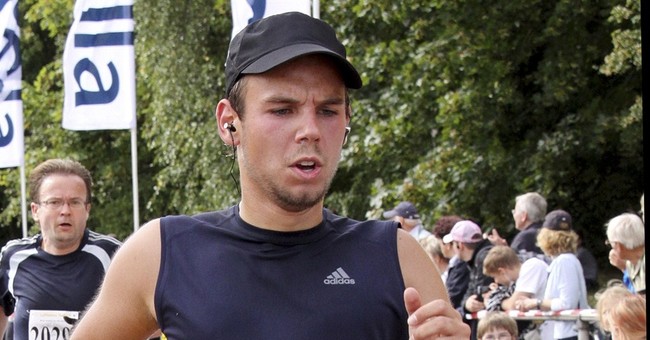 UPDATE: Via NYT: Andreas Lubitz was being treated for vision problems that could have ended his career as a pilot

UPDATE: The French Air Force scrambled a Mirage jet fighter to the area where contact was lost with Germanwings Flight 9525, reports the Sydney Morning Herald. Tragically, it arrived too late to offer any assistance.

Another twisted turn in the curious case of Andreas Lubitz, the unstable German airline pilot who purportedly crashed Germanwings Flight 9525 into the side of a mountain in southeastern France on Monday. For days, authorities and investigators have been trying to figure out (a) why Lubitz deliberately locked the captain out of the cockpit and (b) subsequently and slowly took the plane off course. Perhaps, however, they're getting closer. New details suggest that Lubitz was excused from flying the day of the crash for health reasons, even obtaining a series of doctors notes which he subsequently and reportedly ripped up and kept secret:

Torn-up sick notes for the day of the crash "support the current preliminary assessment that the deceased hid his illness from his employer and colleagues," Duesseldorf prosecutors' office spokesman Ralf Herrenbrueck said Friday. Such sick notes from doctors excusing employees from work are common in Germany, even for minor illnesses.

Prosecutors didn't say what type of illness — mental or physical — Lubitz may have been suffering from. German media reported Friday that the 27-year-old had suffered from depression.

The New York Times also reports that officials have not yet determined a clear motive, but several hypotheticals have already been taken off the table:

The German investigators said they had not found a suicide note or “any indication of a political or religious” nature among the documents from Mr. Lubitz’s apartment. They also played down the possibility that his actions were the result of a romantic breakup, saying he was in a long-term relationship at the time of the crash.

“However, documents were secured containing medical information that indicates an illness and corresponding treatment by doctors,” Ralf Herrenbrück, a spokesman for prosecutors in Düsseldorf, said in a statement.

Even more strange, by all outward appearances Lubitz seemed to be a normal person, according to The Wall Street Journal:

Mr. Lubitz’s motive for crashing the plane remain unclear. People who knew him described him as quiet, pleasant and responsible, and Lufthansa said it had no indication why he would have deliberately crashed the aircraft. People who saw him recently said he didn’t appear burdened.

But clearly he was; otherwise, he would not have allegedly murdered so many innocent people.

Meanwhile, this tragic act of mass murder has convinced the airline to overhaul it’s safety regulations; from now on, at least two "authorized persons" will be required to be “in the cockpit at all times”:

The disclosure of torn medical documents at the co-pilot's home came shortly before Germanwings' parent company, Lufthansa, announced that it would be changing company policy to require two crew members remain in the cockpit at all times during the flight, in light of the finding that co-pilot Andreas Lubitz apparently stopped the captain from re-entering the cockpit and forced the plane to crash.

Implementing this change is a no-brainer, of course. And yet it's profoundly tragic that such regulations weren't already in place before this reported killer got behind the wheel.