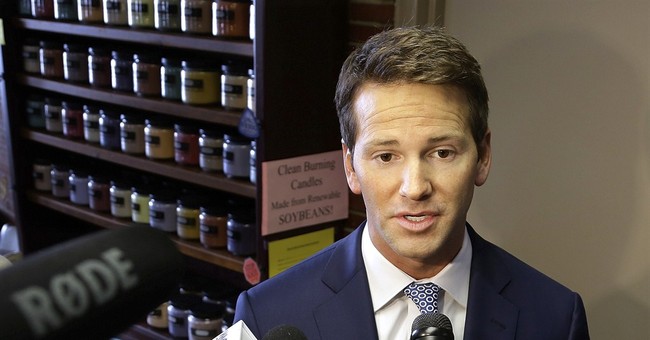 Politico reports that embattled Rep. Aaron Schock (R-IL) will resign his congressional seat before the end of the month.

When asked yesterday by the news outlet about “questionable mileage reimbursements,” the congressman responded about a day later, in part, with this:

“Today, I am announcing my resignation as a Member of the United States House of Representatives effective March 31,” Schock said in a statement. “I do this with a heavy heart. Serving the people of the 18th District is the highest and greatest honor I have had in my life. I thank them for their faith in electing me and letting me represent their interests in Washington. I have given them my all over the last six years. I have traveled to all corners of the District to meet with the people I’ve been fortunate to be able to call my friends and neighbors.”

Schock, 33, gained a following for posting flashy photos on social media of himself traveling, surfing and on other adventures. But he was hounded with questions after The Washington Post wrote in February about lavish decorations in his Capitol Hill office. ...

Concerns arose about his spending habits, with several media outlets reporting that he failed to disclose some expenditures and had to repay others after improperly using taxpayer funds.

UPDATE: None of these problems were going away, either:

Schock's high-flying lifestyle, combined with questions about expenses decorating his office after the TV show "Downton Abbey," add to awkward perceptions on top of allegations he illegally solicited donations in 2012.

The Office of Congressional Ethics said in a 2013 report that there was reason to believe Schock violated House rules by soliciting campaign contributions for a committee that backed Rep. Adam Kinzinger, R-Ill., in a 2012 primary. The House Ethics Committee has said that query remains open.

UPDATE: Politico added an update to their initial story. It appears the congressman was caught red-handed ripping off taxpayers:

Schock billed the federal government and his campaign for logging roughly 170,000 miles on his personal car between January 2010 and July 2014. But when he sold that Chevrolet Tahoe in July 2014, it had only roughly 80,000 miles on the odometer, according to public records obtained by POLITICO under Illinois open records laws. The documents, in other words, indicate he was reimbursed for 90,000 miles more than his car was ever driven.

UPDATE: House Speaker John Boehner (R-OH) has weighed in on the impending resignation:

Boehner: With this decision Rep Schock has put the best interests of his constituents and the Hse first. I appreciate Aaron’s years of svc

Rep. Schock was elected to Congress in 2008.