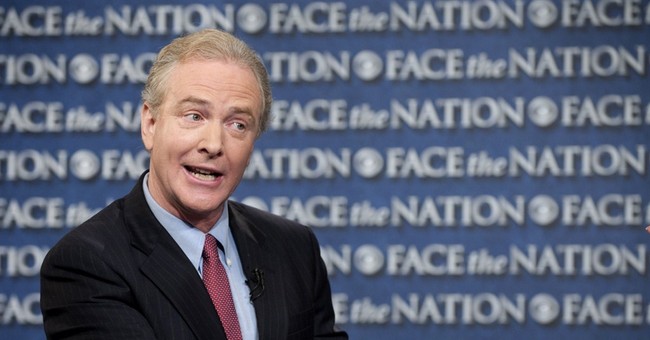 Rep. Chris Van Hollen (D-MD), who is a regular fixture on the major television networks and currently serves as a ranking member on the House Budget Committee, is making moves:

Rep. Chris Van Hollen (D-Md.) announced Wednesday he plans to run for the U.S. Senate in 2016.

"I am writing to let you know that I have decided to run for the United States Senate from our great state of Maryland," Van Hollen wrote in an email to supporters. "In my very first election for Congress I believed that people were tired of politics as usual, and I ran a campaign based on key issues and ideas that matter to our future. The same is true today."

As a rising star in the Democratic Party and close confidant of the House Minority Leader, Van Hollen was rumored to be a viable candidate for Speaker if and when House Democrats put together a winning coalition. Apparently, however, he saw an opportunity and he's taking it. That being said, Van Hollen won’t necessarily coast to the nomination -- other progressive candidates will soon jump in -- although his electoral prospects got a bit better with this announcement.

Naturally, then, the general consensus is that the Democratic nominee (whomever that will be) will inevitably succeed outgoing Sen. Barbara Mikulski (D-MD). But is there any hope for a Republican upset? Real Clear Politics’ Sean Trende, for his part, offers some very cautious optimism:

Could a Republican win the general election? Probably not. Maryland is something of a city-state, with most of its population living in urban and suburban areas around D.C. or Baltimore. Many of these voters are socially liberal, depend on the federal government for their livelihoods, and resist GOP anti-government rhetoric. Overall, this was Obama’s fifth-best state in 2012, giving the president a larger victory margin than Massachusetts or California.

In other words, a candidate like Dr. Ben Carson (who apparently has more ambitious plans in 2016 and little interest in Maryland politics) would struggle to catch fire. Then again, as Jonah Goldberg wrote earlier this week, since his presidential chances in 2016 are growing bleaker by the day, perhaps he should at least try:

I’m not trying to get Carson out of the race for president. By all means, there’s a little time for him to continue testing the waters. The filing deadline in Maryland is January of 2016. But if the outlook for the Oval Office looks bleak, he could do a great service to his party and his country by looking toward a more winnable race. If a Republican wins in 2016, there’s going to be a lot of work to do replacing Obamacare. Under those circumstances, it would be good to have another doctor in the house or, in this case, the Senate.

Of course it would. But barring a major reversal, it appears Dr. Carson's mind is already made up.