Sen. Barbara Mikulski: "I Will Not Be Seeking a Sixth Term" 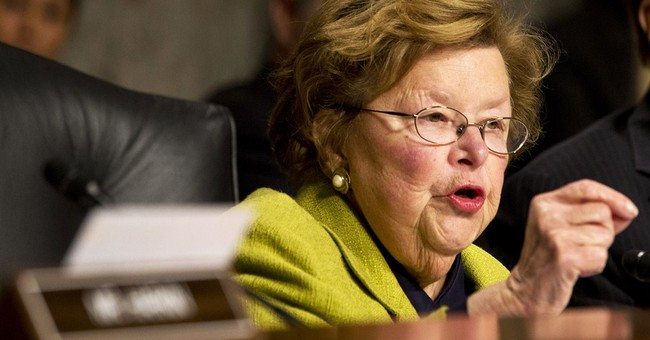 This is genuinely surprising. Sen. Barbara Mikulski (D-MD) – who has served in Congress longer than any other woman in American history – announced today she is calling it quits after 2016.

“Service for me is about solving problems, helping my constituents, making sure that they not only get by, but they get ahead,” she said at a press conference in Baltimore, Maryland Monday morning. “Now, in 2016, my reelection would be on the horizon. I have thought long and hard about the next two years and I had to ask myself this question: ‘Who am I campaigning for?’”

Clearly, after giving serious thought to her political future, she chose the latter course.

“I’m here today [to announce] that I will not be seeking a sixth term in the United States Senate,” she declared. “This has been a hard decision to make. I have served in the Senate for a while and at the conclusion of this term, I will have served over 30 years [in Congress]. That’s hard to believe.”

“I want the people of Maryland to know there’s nothing gloomy about this announcement: There’s no health problem, I’m not frustrated with the Senate — the Senate will always be what the Senate is,” she intoned. “But I have decided … I want to give 120 percent of my time [to] my constituents. Because it’s never been about me, it’s always been about them.”