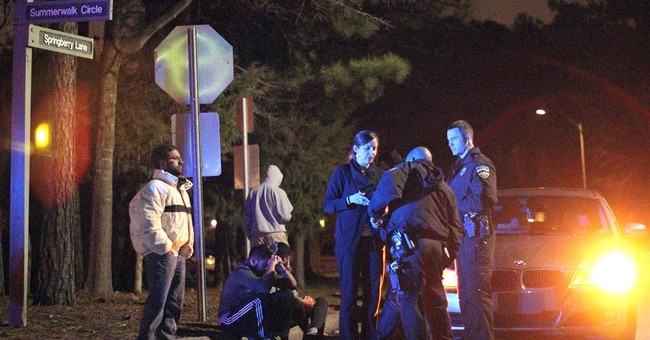 A man, his wife and her sister — all college students — were shot to death at a quiet condominium complex near the University of North Carolina, but police had not yet given a motive or released details about the suspect.

Craig Stephen Hicks, 46, was charged with three counts of first-degree murder in the Tuesday shooting, Chapel Hill police told local news outlets. He is being held at the Durham County Jail and was expected to make a first court appearance Wednesday morning.

The victims were all in their early 20s -- or younger:

The former two victims were married roughly a month ago. Click through the Facebook page established in their honor to see how truly senseless this crime was. These were good people who were peaceful and full of life; they were victims.

Speaking of which, what provoked such an unspeakable act of violence? Given the fact that all three students were Muslims, and the alleged shooter was a so-called “anti-Theist,” one would think investigators would be careful not to rule this out as a hate crime.

"Based on the brutal nature of this crime, the past anti-religion statements of the alleged perpetrator, the religious attire of two of the victims, and the rising anti-Muslim rhetoric in American society, we urge state and federal law enforcement authorities to quickly address speculation of a possible bias motive in this case," a Council on American-Islamic Relations (CAIR) spokesperson told Reuters.

But apparently they have:

"Our preliminary investigation indicates that the crime was motivated by an ongoing neighbor dispute over parking”. -- Chapel Hill Police

Hicks allegedly killed three students over...a parking disagreement? That sounds utterly ridiculous. But if this shooter was crazy enough and evil enough to kill three innocent people in the first place, I suppose it doesn’t matter what the pretext was. Three students are dead and a community is in anguish.

Prayers for the victims and those who loved them.

Dr. Mohammad Abu-Salha told the newspaper that his daughter, who wore a headscarf, had told him that Craig Stephen Hicks, the 46-year-old man charged with the murders, lived next door and that "they were uncomfortable with him, but that they did not know he would go this far."

The paper quotes Abu-Salha as saying his daughter told him, "He hates us for what we are and how we look."

That certainly throws cold water on the theory, suggested by police, that the victims' religion played no part in the killings. It appears that it did.