Jordan's 'Eye For an Eye' Response 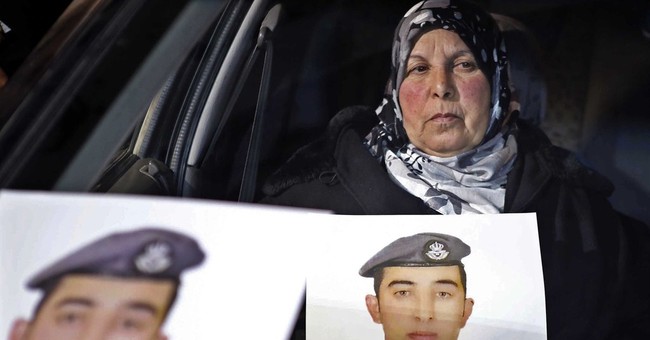 Horrible acts of barbarism sometimes provoke forceful responses. And one might say the Jordanians are responding forcefully to the murder of one of their fighter pilots. Despite earnest efforts by the Jordanian government to free him from ISIS, via hostage negotiations, we woke up yesterday morning to the tragic news that the terrorist organization had acted in bad faith and reportedly killed him roughly a month ago. As a result, the Jordanian people have taken to the streets in protest and the government is moving swiftly and decisively to enact “eye for an eye”-style vengeance:

Jordan will execute Wednesday an Iraqi would-be suicide bomber on death row and other jihadists after having vowed to avenge the murder of a Jordanian pilot by Islamic State jihadists, an official said.

"The sentence of death pending on... Iraqi Sajida al-Rishawi will be carried out at dawn," the security official said on Tuesday, speaking on condition of anonymity.

Rishawi, the would-be bomber, was condemned to death for her participation in deadly attacks in Amman in 2005, and IS had offered to spare the life of the Jordanian fighter pilot, Lieutenant Maaz al-Kassasbeh, if she were released.

"The death sentence will be carried out on a group of jihadists, starting with Rishawi, as well as Iraqi Al-Qaeda operative Ziad Karbuli and others who attacked Jordan's interests," the security source said.

By the time you read this Rishawi will already be dead. I’ll leave you with this:

Jordanian pilot Lt. Muath al-Kaseasbeh was part of the US coalition fighting ISIS, we owe him thanks for his service and ultimate sacrifice

UPDATE: To confirm, Rishawi has been put to death.